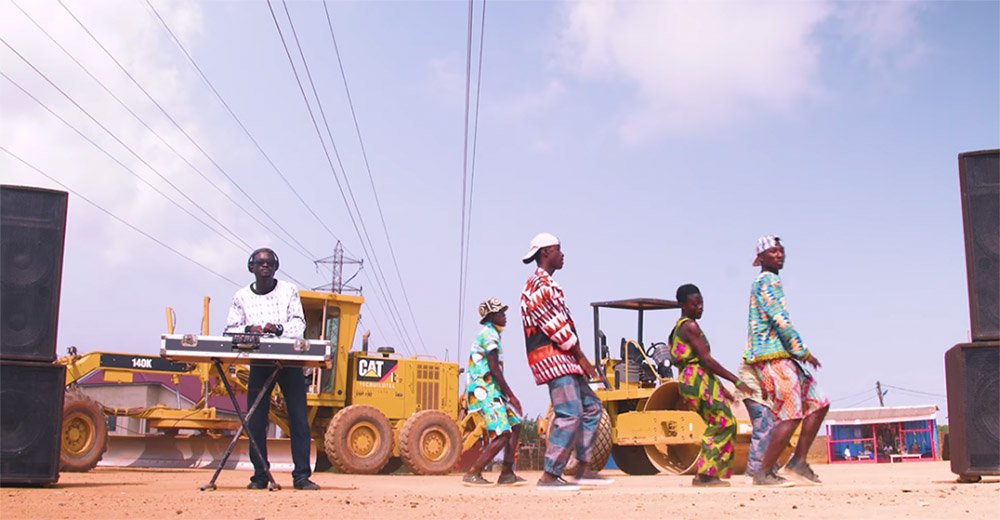 Life is strange and it always surprises when you least expect it. For some African producers the serendipitous butterfly effect was sparked in the past few years by the blog-turned-label Awesome Tapes From Africa and the musical diggin of its founder, Brian Shimkovitz. After having tracked down Ata Kak, he surely knew he was onto something big when he found DJ Katapila’s music cassette while he was walking in a market in Kumasi, Ghana.

Ishmael Abbey, aka DJ Katapila, is the ghanaian DJ and producer whose music is a real sensation spreading across Ghana and Europe so much so that he is going to inundate the south of Italy with his love and energy for IndieRocket Festival.

DJ Katapila has been djing since the ’80s, but he reinvented himself completely when he started producing at the age of 39. His sound is dance music at its pure core imbued with three decades of Accra’s urban and dance culture. He combines Roland-808 samples which recall 1990’s Detroit techno and Chicago acid house with essential elements of traditional Ga music. Nonetheless, his songs aren’t just dance floor bangers, they also want to convey important messages revolving around the themes that are most dear to him, such as Accra’s culture and lifestyle, the love for his family, the way people with disabilities are perceived in some African countries and much more.

We had the pleasure to have a long delightful conversation with DJ Katapila to assuage our curiosity about his incredible life journey, the inspiration behind his music, his life-changing encounter with Awesome Tapes From Africa and more.

GRIOT: How did your artistic journey begin and what led you to start producing?

DJ Katapila: I started in the ’80s as a young DJ. I was playing different kinds of music and shows because there was a competition in Accra among all the DJs at the time. Being a DJ, every year you need different equipment, new music styles to brand yourself.

In the late ’90s, around 1998, I started to play with computers with a friend of mine. At that time it wasn’t easy to get a computer, but luckily I got one and I started converting cassettes onto the computer and then on CDs, I had a small studio in my room! Then I had a chance to get Fruity Loops 3, a music production software, and I started producing. Sometimes during my DJ sets, I had a lot of motivation in the music that I played, and as the beat went, I would mix the tracks so as to create new beats. So I started making my own instrumental beats, every genre and dance music that we dance here, and later on I also decided to put my voice on them. When DJs started playing the tracks around, people would ask who the producer was, so I said: let me do this, I’ll record it myself and people will know that this is me.

You released two explosive EPs, Trotro in 2016 and, Aroo last March. What’s the inspiration behind them?

I made those songs in Accra. Cocoawra was the first song I produced, before I was mainly doing instrumentals without actually putting a name on them. I always see what’s the trend in our city and I put it in music. Trotro is our transport in Accra, it is also the title of the album. The track Nnkra Dokunu is about a type of food (dokunu) that we eat here, I wanted to do a song about that. Zoomlion is a sanitation company, they make sure the city is clean and for that song I got the inspiration from my mother. She is 85 years old now and she’s always cleaning around the house. When she was young she worked as cleaner and people used to gossip about her. Sometimes it made me feel really sad, so I said: if my mum is a zoomlion—which is what people call you if you work for the company—we are all zoomlion: my father is a zoomlion, everybody, including me, is a zoomlion.

The latest track I made is called Monkey. It is a song that I made for a friend of mine who is disabled.  Sometimes in Ghana and some other countries in Africa, children with disabilities are not given any love, and I realised when I was travelling around Europe it wasn’t like this over there.
Every beat wants to make people dance, I tell people that if they don’t understand the lyrics, the beat will let them go crazy, and if they understand the song, then they’ll know where I’m coming from. I also got my daughter to help me, at the time she was three, you can hear her singing in Zoomlion. That’s why I featured her as a producer at the back of the Trotro album.

What about the most recent part of your artistic path? How did Brian get in touch with you?

That was a big surprise. Brian went to Kumasi, he found my cassette and then went back to the US, but my number was at the back of the cassette. One day he called me and told me he had found my cassette, but I did believe him. So he sent me a picture of him holding the tape, saying “this where I got your number, is this you?” because he also doubted that I was the person he was looking for.  We started talking, he asked me to send him the original tracks and that he was going to give me money and we would sign an agreement. I still wasn’t sure about it, so he sent a guy to Accra that went looking for me at any radio station, everywhere! Finally he got hold of me, he explained what Awesome Tapes From Africa does and then I realised that it was all true. Now we’re like a family.

How did you feel?

I was so amazed. My music was quite popular in Ghana, but when I saw it everywhere on the Internet and I saw the reaction of people, I was truly amazed. And what makes me most happy is that my music is on vinyl and today popular musicians in Ghana don’t have their music on vinyl. So, I’m very glad my music is all over the world now, when I perform people love it.

You are going to perform in Italy on July 1st at IndieRocket Festival. Is it your first time in Italy?

Yes, I’m very excited to visit Italy because it’s my first time there. I have family there and I haven’t seen them for almost twenty years. I don’t know where they are but sometimes I think about them. They might hear my music but they might not know how to find me, so I hope all Ghanaians in Italy who find out about me will spread the word.

As part of his summer tour, DJ Katapila will perform at IndieRocket Festival in Pescara (Italy) on July 1. Find more info here.

Cover Images | Still from the video Monkey by DJ Katapila