At the heart of the Peruvian artist's painting, sculpture and performance, is a critique of border regimes and a celebration of anti-colonial aesthetics. The Cuzco-based artist is in Rome to present her site-specific performance The children are not of the wolf for the curatorial program Hidden Histories 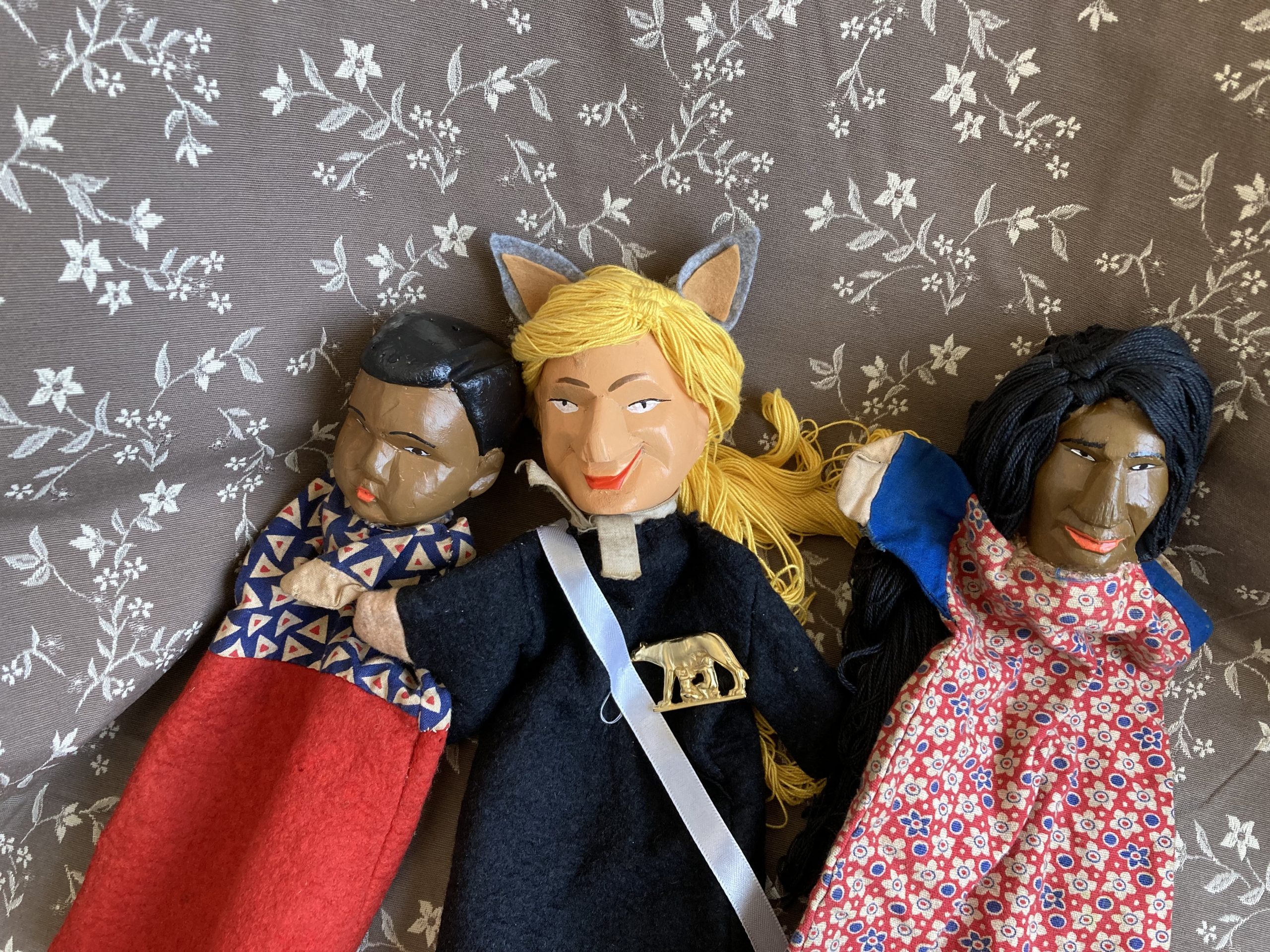 Daniela Ortiz, I Figli non sono della lupa (The children are not of the wolf), site-specific performance, 2021. COURTESY l'artista

The small talk at the beginning of my conversation with Daniela Ortiz leads straight into the themes that she engages with as a painter, sculptor and performing artist. The Peruvian artist is telling me about the beginnings of her artistic career when we digress into the loaded symbolism of a luxurious culinary pair: chocolate and gold. The Cuzco–based artist, who unexpectedly found herself around significant amounts of both while working at a high–end Chocolate Boutique in Barcelona to finance her education is assertive: “Chocolate is this colonial material that Europe has used for exploitation for a long time.” For most chocolate lovers, however, these dynamics are not always immediately apparent.

At its most basic, chocolate is a mixture of cocoa powder, sugar and oil—palm oil is preferred in industrial production. All of these ingredients were the drivers of the plantation economies of Africa, Asia and Latin America well into the 21st century, and some of the largest multinational food companies of the World today rely on palm oil for most of their products. Yet, the combination of chocolate with Gold peaked Ortiz’s interest. “They would decorate the chocolate with gold. Knowing that the process of extracting and bringing gold to Europe has historically been a process of death and exploitation of people and territories, it was really shocking for me to see high and middle–class Europeans eat this gold just for this colonial fantasy or pleasure.”

Ortiz worked at the boutique to sustain herself, so she lacked time and money to make “proper Art” as she calls it. However, she was serious about wanting to do art despite the economic constraints. “I started doing art with what I had, using performance and conceptual art which are white and Eurocentric aesthetics, but it helped me to explore the idea of not limiting myself.” She shared her work via Social Media to reach audiences and document what she was doing. Since those incipient efforts, she has been interested in analysing and confronting colonialism and all of its consequences, contemporary institutional racisms, as well as economic relations with the Global South.

“I couldn’t paint for eight years, but now I am using oil and acrylics,” she responds when asked about the mediums that she is currently channelling these abstract themes through. “I not only enjoy the process, I also find that drawing and painting connect you to some way of thinking. With painting you create images that do not exist,” she says. In that possibility, Ortiz sees a chance to create images of moments of anticolonial justice. Situations where Justice has been served to communities that have been violated, but also the ones where perpetrators of injustice are held to some form of public account “like Fabrice Leggeri, the director of Frontex for example that I have portrayed many times in my work.”. One of the lessons she has learned from this latest foray into painting is that mistakes don’t really matter. A painting can still be a complete artwork even when the outcome is not what was originally intended.

Like many others, Ortiz has been highlighting the presence of openly racist colonial monuments all over Europe particularly because the fact that they are still standing has little to do with mere chance. “It’s not like history left them in the streets of Europe and Latin America, it is because white supremacy is interested in creating  maintaining and honouring those monuments. The extreme right wing in Spain use Plaça del Portal de la Pau, where the Columbus monument is, as a gathering space because it is a symbolic place for them for the policies they are defending.”

For Ortiz, such policies have to do with reinforcing colonialism, patriarchy and capitalism, but rather than the monumental scale alone, Ortiz is keen on the discursive dimension as well “colonial monuments are needed to maintain racist narratives that bolster migration control. You need to have a Columbus monument with an indigenousperson on his knees, in order for you to have an immigrant detention centre where you detain and deport Bolivians, Peruvians, other Latin Americans but also Africans and Arabs. If a history of resistance against white power was told more often, it wouldn’t be possible to inflict that violence so easily.”

The materiality and the aesthetic of monuments, chiefly metal and stone, works in ways that go well beyond representation. “With the Columbus monument, you don’t even see Columbus, you just know that he is up there, and then there is all the symbolism at the base of the monument. What is interesting to see is that racialized people from the Global South are being represented in those monuments. In the context of Spain (and Europe in general) as well as certain contexts of the Global South, the representation of racialized people in colonial monuments has to do with reinforcing apaternalist narrative that serves racism. Indigenous people are shown as humble, naked and so on for a reason: these monuments honour white people but also represent the Global South in a certain way,” she says.

In the newer works Ortiz is interested in resistance, but also inthe possibilities of alternative existence that are not Utopias. “There are contexts in the Global South that are liberated form colonial power. For example if you think about Chiapas in Mexico.” Ortiz calls such landscapes “territories of resistance.” She comes from one such territory, a fact that has informed her practise from the beginning. Cusco was the capital of the Inka, and maintains a strong Quechua identity until today. Growing up, she saw a lot of monuments to anticolonial figures around, but the general idea behind monuments was a vastly different one, “You have monuments to daily life, to corn, to potatoes, local dances and so on, which breaks this narrative of heroism and that is a cultural practise that has existed for many years. Aesthetically, they are all super colourful.” Consequently, a monument for Ortiz is close and relatable because in Peru “people honour the thing that gives them life which I think is beautiful in the way it changes the perspective of society, of who and what is recognized.“

An architect who attended her exhibition of the Monuments series in New York City made fun of them because they were little, saying arrogantly that they looked like “those tiny things that Latin American families put on their refrigerators.” Amidst animated laughter, Ortiz asserts “That is what I want with my work. I want the Madre of the Bronx that goes to the Museum to see that and feel that it is her language and not that they are talking about her things in another language.“

Monumentality, both in its material, legal and narrative forms also informs her performance work. When she was pregnant with her son, she had a blood transfusion, ensuring that the Blood used for the procedure was from a Spanish person to disrupt the jus sanguinis, the law of the Blood which applies in Spain and in most of Europe and determines that only children born of parents of a certain nationality can receive citizenship in that national territory. “My son was born in Spain and he didn’t have the right to be Spanish. It’s not because we want to be Spanish, but because it is the only way available to us to stay in Europe without living in the constant risk of being deported and persecuted by immigration laws.” It is in such small things that she sees the power of performance art. “I do use the elements of power and monumentality as a background to my performance pieces because it is their material and their effort, it is their monument. By doing a small action or intervention, you can change its significance.”

In Rome’s Gianicolo hill, a site symbolic of the history of the Italian Risorgimento, Ortiz presents a new performance titled I figli non sono della lupa (The children are not of the wolf) in September 2021. Referencing  the legend of Romolo and Remo, the two kids who were fed by a wolf, her intervention is centered on the figure of Anita Garibaldi and her equestrian monument, commissioned by the fascist regime and erected in 1932. The statue portrays the Brazilian woman on horseback, cast as both mother and warrior and as a ‘heroine of the two worlds’ even as her physical features were Europeanised by the monuments sculptor.

“It is funny how Anita Garibaldi is considered by Europeans to be a hero in Latin America or as a revolutionary in Brazil,” Ortiz adds after telling me about her planned performance which she is still conceptualizing in her head. “In Brazil she is the hero of Criollo white people from the south of Brazil, Sao Paulo. Grassroots movements and the black community would never exalt Anita because the process of independence Garibaldi was trying to push was not the kind of independence that the people were really fighting.” For Ortiz, Italy reified Anita Garibaldi for very particular, political and provincial reasons, and the fact that there are many monuments of her should not be taken to mean anything. “Obviously there are monuments, but that is because white people have been making those monuments, not because it has been important for anyone.“

‘I Figli non sono della Lupa’ (‘The children are not of the wolf’) is part of Hidden Histories, a curatorial platform of site-specific  interventions in the city of Rome, curated by Locales.