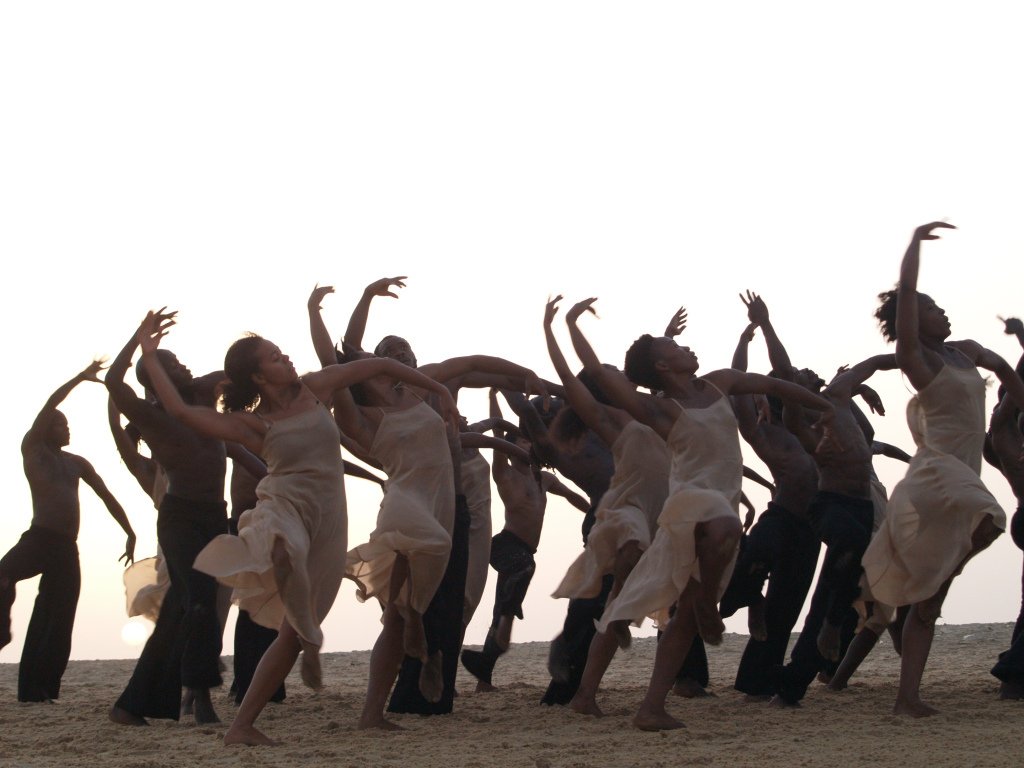 A beach of white sand. The light bleaching from the sky. A girl lying on a red cloth. An eerie bassoon piercing the silence. This is the way in which audiences get their first glimpse of a remarkable collaboration between the Pina Bausch Foundation, École des Sables in Toubab Dialaw, Senegal, and Sadler’s Wells to create a new version of Pina Bausch’s ground-breaking The Rite of Spring. In 1975 the German choreographer and dancer (1940 – 2009) premiered The Rite of Spring (Le Sacre du printemps), considered her most renowned piece, alongside Café Müller (1978). The piece, inspired by Igor Stravinskij’s ballet, at the time caused a stir in the ballet world: thirty dancers on a stage covered with a layer of soil, all bare-chested or wearing tunics, staged an essential and powerful choreography, which remained in history.

Restaging this work was always a bold venture: the first time The Rite of Spring would have been performed by a specially-recruited ensemble, the first time by dancers from African countries. But the onset of Covid-19 meant that its planned premiere in Dakar was cancelled just days before it happened, as was the subsequent tour to Sadler’s Wells in London and other European ventures, including the home of Tanztheater Wuppertal Pina Bausch in Germany.

For Germaine Acogny, co-founder of the renowned École des Sables, a centre for the teaching and development of traditional and contemporary African dance, the first run through of the work felt like a fulfilment. “I was deeply touched and moved,” she says. “I wished that Pina could have seen this powerful interpretation.”  Although their paths only crossed a few times, the venture represents the culmination of her relationship with a woman she had felt close to for a long time, “I felt there was a synergy between what we both were doing,” says Acogny. “For me, The Rite of Spring should be danced by African dancers because it is something universal.  When I first heard the Stravinsky music, I felt it was an African rite.” “Bringing The Rite of Spring to the beach and shooting it just after sunset was a spontaneous reaction to the consequences of the Covid-19 pandemic,” says Salomon Bausch, executive director of the Pina Bausch Foundation. “It was the last moment of being together within a crisis surrounded by uncertainty.”  Alistair Spalding, Artistic Director of Sadler’s Wells, says that the resulting film, with sand replacing the peaty earth on which the dance is normally performed, is a record of “a powerful, one-of-a-kind moment, which feels very much in harmony with the spirit of Pina Bausch.”

The idea for this version of The Rite of Spring came from the Pina Bausch Foundation which is committed to keeping Bausch’s work alive both by preserving an archive and by encouraging new generations of dancers to explore her creations under the supervision of dancers who worked with the choreographer herself.

Salomon Bausch, Bausch’s son, believes that these “transmission projects” will help increase understanding of one of the 20th century’s most significant and important bodies of work. “I am really curious to learn what is inside this heritage,” he says. “What is it?  What does it mean to people today? We need these new projects where we try to provoke things and learn new things, to do things in ways we have not done before.”

Watching rehearsals in Senegal, he felt the project had succeeded. “It opens the eyes to aspects of things we haven’t seen before not only in the piece itself, but also in terms of what the work does to the people who dance it,” he says, in a documentary film made to accompany this screening.

Even before its planned premiere at Dakar’s Théâtre National Daniel Sorano was derailed by the coronavirus pandemic, this was an ambitious project.  More than 200 dancers from all over the Continent submitted video audition tapes to Josephine Ann Endicott and Jorge Puerta Armenta, former dancers with Tanztheater Wuppertal Pina Bausch who are in charge of this restaging.  One hundred and thirty-seven were invited to audition workshops in Burkina Faso, Senegal and the Ivory Coast where they were taught excerpts from the material and a final cast of 38 [from 14 African countries] were chosen.  Then the rehearsal process began in earnest. The dancers represent a range of backgrounds and techniques, which made the project thrilling as well as challenging. “It will be different,” says Acogny. “But that’s what makes it exciting.  These dancers will do what all dancers do; they will interpret the movement of Pina Bausch.”

The piece also relies on a total immersion in Bausch’s visceral response to the score and the theme.  “How would you dance if you knew you were going to die?” she asked, when trying to find the right steps to match the elemental power of the music.  Her answer to that question means that The Rite of Spring requires extraordinary commitment and exposure from its dancers. Endicott observes: “You run with your heart and forget all you have learnt before and just come out and be yourself.  It has to be real. If you are not exhausted at the end, you haven’t danced it properly.”

The dancers in Senegal have absorbed that approach deeply, in their minds and in their bodies. As Serge Arthur Dodo, one of the dancers, remarks: “When we watch the videos or see the movements the stagers give us, it’s clear that we want to do it like them, but I would say that for me it is about being myself.  It’s about being able to take what they give us and make it ours.”

That belief is characteristic of this staging.  It looks back to Bausch’s heritage and puts down a marker for a way of presenting her work in future. As Alistair Spalding remarks: “It really is an exchange.  It takes this repertoire to the Continent where it has rarely been seen before. And audiences around the world get a chance to see different dancers and a different spirit. There is a very strong passion about this project”.

Germaine Acogny agrees. “It gives these dancers an opening and a curiosity to do other things than they are used to doing. It will make them grow.” For Jo Ann Endicott it has been “a wonderful challenge, a wonderful experience.  It is the right moment for something like this to happen.”

Everyone involved is committed to bringing it to stages around the world when theatres reopen, when lockdown lifts.  But for now, Dancing at Dusk is a record of a particular moment in time, just before the world stopped, but the dance continued.