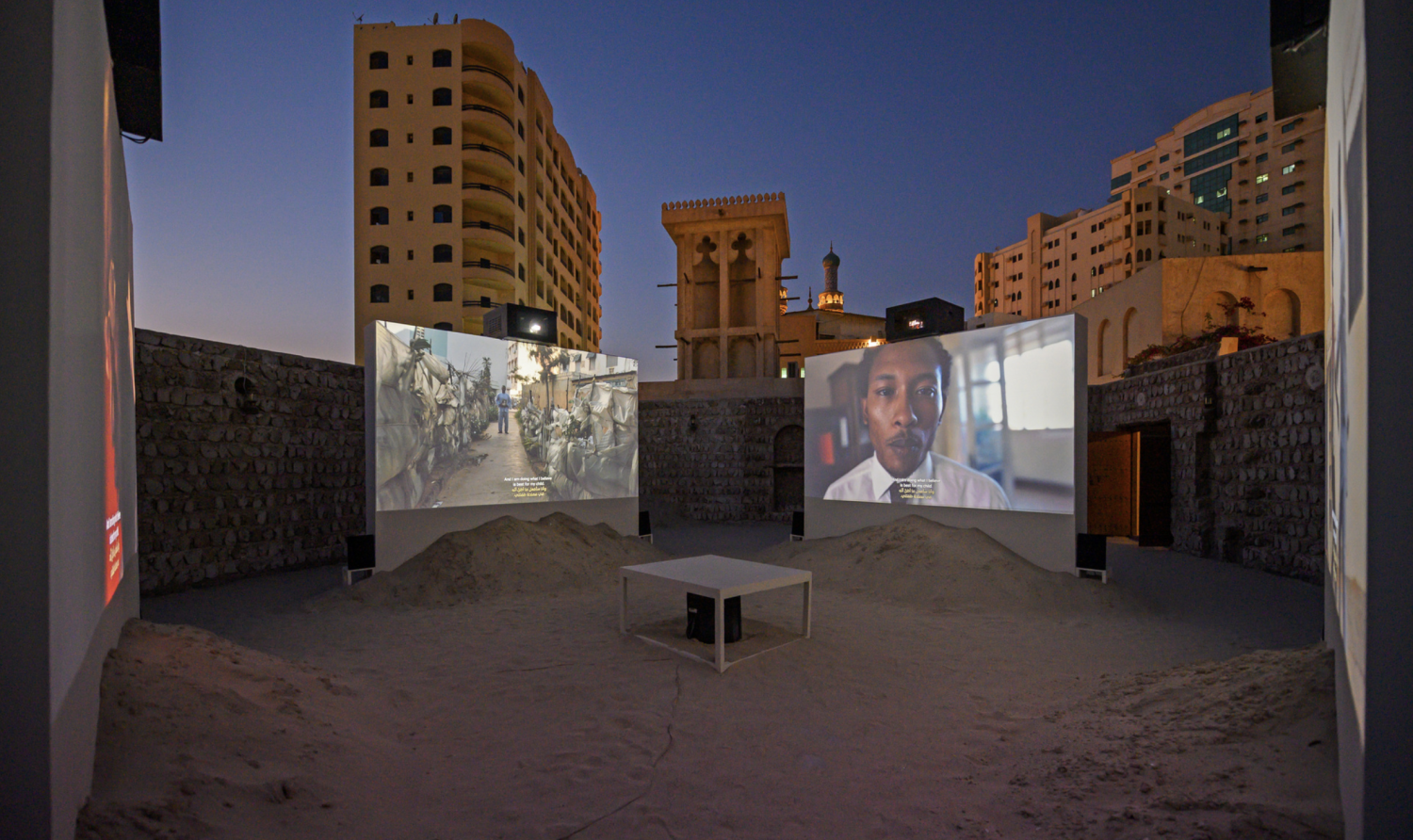 Tuan Andrew Nguyen’s practice explores strategies of political resistance enacted through counter-memory and post-memory. Extracting and re-working narratives via history and supernaturalisms informs Nguyen’s video works and sculptures where both fact and fiction are held accountable. In The Specter of Ancestors Becoming, Tuan Andrew Nguyen goes beyond this specific history and works in the space of memory, proposing not only an answer to the question “What might memory look like?”  but more importantly “What might the memory of what has never been seen look like?”. Nguyen deals with the spaces of mourning and loss engendered by the silence, and along with his collaborators in the film, makes the choice to remember. The families Diouf, Gomis, Ndoye, Gueye, Sarr, Doucouré, Thiaw, Seck, Coly, Lame and Ndiaye are deeply rooted in their history and mixed ancestry. In Nguyen’s four-channel installation, they are in a conversation that is much larger than their individual histories.

The stories of these Vietnamese-Senegalese families have only been partly told in Senegal. If history is a line drawing in black and white, memory lends texture and shading to it. In Re-Membering The Name Of God (2015) Wendell Hassan Marsh writes: ‘History is the science of the State, while memory is the art of the stateless.’ In The Specter of Ancestors Becoming, Tuan Andrew Nguyen goes beyond history, working in the spaces of memory, offering a response to the question of what memory is, and probing what the memory of things unseen can become.

For many members of the Senegalese-Vietnamese community, therein lies the mystery. In social semiotics, signs are resources that people appropriate and use – they are not fixed, but rather, they are tools used to make sense of a complex and confusing world. Therefore, when there are not enough forms to attach to sentiments, ideas or nostalgia, it becomes difficult to make sense of the past and the way in which it interacts with the present.

Yet, ‘remembering is also a choice,’ Macodou Ndiaye, a co-author and protagonist of Nguyen’s work reminds us. Along with its protagonists, Nguyen’s film chooses to remember considering the spaces of grief and loss engendered by the silence of memory. Importantly, the structure of the project is indicative of the way in which memory operates. The script, written by and performed by the members of Senegalese-Vietnamese families, is a cumulative source of information, which has traversed the minds and bodies of many. The film is not about historical facts, but, rather, it is a valuable and collaborative source of meaning, re-appropriated by the individuals whose destiny is linked to the information held therein.

The film constructs an intimate space from a mixture of acted scenes, archival footage and sequences showing members of the Senegalese-Vietnamese community recounting their stories. This powerful connection exposes the basic elements of memory. Rather than rejecting this structure, The Specter of Ancestors Becoming uses it as a toolkit to penetrate a space obliterated by history. The installation itself immerses the viewer in simultaneous yet different perspectives moving forward in time. We experience fragments and gain access to meanings, feelings and the memory of things unseen.