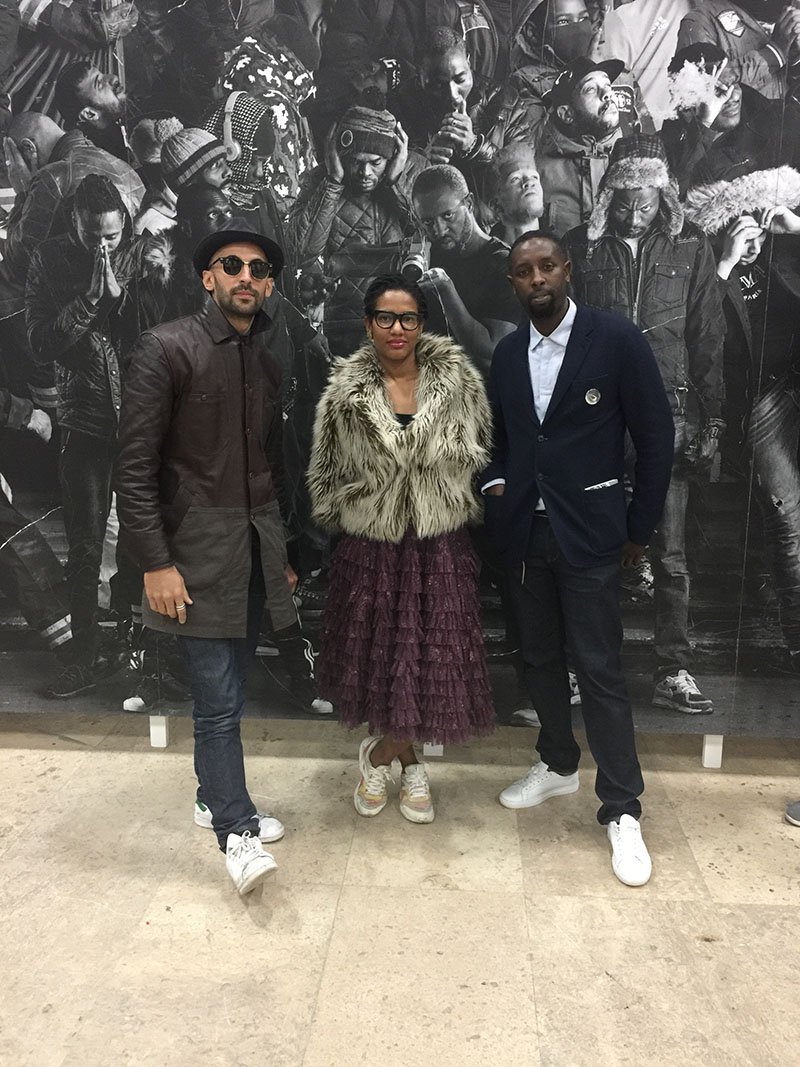 “I’ve been going back regularly to Clichy-Montfermeil with my friend Ladj Ly for more than fifteen years. As soon as I think I know this town by heart, it totally metamorphoses, as it is always brimming with life. Since December 2016, I have photographed over 750 inhabitants, workers and passers-by in Clichy-Montfermeil, and I’ve asked them to re-enact moments from their everyday lives.

My work is linked to a type of architecture that can unite just as it can enclose. This fresco forms an image of Clichy-Montfermeil made up of portraits of different generations who have seen the utopia of this neighbourhood fall apart, with poverty and social tensions worsening to such an extent that it became the trigger point of the biggest riots in French history. It is a portrait of those who strive to put poetry back into cement”

So writes JR on his instagram. On April 1st the French artist launched his latest project at Palais de Tokyo, Chroniques de Clichy-Montfermeil. Present at the event were the mayor of Paris, the residents of Clichy, other VIPs invited for the occasion and even the French president François Hollande.

We were also there and while admiring the impressive artwork we met JR, an artist I’ve been following for many years but I had never got the chance to spot and have a chat with. So we had a laugh and he told me how he brought his childhood town, Montfermeil, and its inhabitants to the prestigious art space of Palais de Tokyo. His home is the world, common people his inspiration. GRIOT: Tell me something more about this fresco. Why? And for whom?

J.R.: I did it for the people depicted on this mural, for all the encounters I had in this neighbourhood, but also for all those villages where their diversity is unified. There are 750 people in the fresco and everybody is positioned at the same level. As you can see no one is in shadow, no one is out of focus. Everyone is deeply sharp. The idea was to really gather everybody and to highlight the great moments of this area, but also the tough ones, such as the 2005 riots that broke out after the death of Zyed and Bouna. There are also pictures of people who did not believe in our work at the beginning, such as the mayor of Montfermeil who filed a lawsuit against us. We were only 18 years old and we couldn’t imagine that a few years later he would have posed for us. His portrait is at the center of the fresco. If I’m not wrong, your name is mainly associated with New York and the States. You hang out with Pharrell, Robert de Niro, and other celebs and public figures. What about France? Don’t you miss it?

I know it sounds weird but I’m often in France, and most of my projects are here. I haven’t been in the US for 7 months, I was there only for a week. That was it. Lately I have spent a long time in Brazil, certainly more than in France or the US [Jr made two huge installations for the Olympic Games held in Rio de Janeiro in August 2016.]

Having said that, I feel at home everywhere, but I must confess that making my projects in France always makes me feel very happy, because France is my real home.

You’ve done several projects at Palais de Tokyo, do you have a special bond with this space?

Really? I thought you did many more.

Actually, you’re right. Good memory. We also realized a mural once, but it was outside, not inside. Then there’s another project, but that one is secret and closed to the public. It’s located in the building tunnel. That said, the fresco Chroniques de Clichy-Montfermeil is the first officially exhibited project.

JR listen, I have a weird question: Agnes Varda [the French director JR did the photographic project AV et JR Deux Artistes En Goguette with. They are now filming the documentary Visages, Visages touring around the French countryside.] How is she? I’m asking you because I’m really fascinated by women over 70 years who, like her, still kick ass.