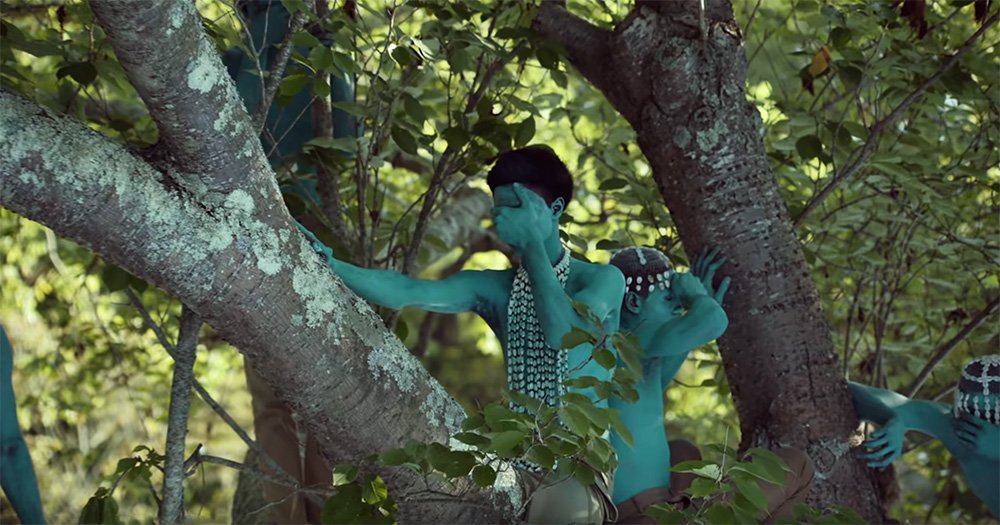 Teal body painted shirtless male sitting in a tree, covering their eyes, while a voice is heard asking, 'Who are you?' - Frame video from Black is King

One year after the release of the remake of The Lion King (Jon Favreau, 2019), Disney and Parkwood Entertainment have recently released Beyoncé’s new visual album, Black is King. Based on the American singer’s album The Lion King: The Gift, the film gathers a fabulous cast of artists like Moonchild Sanelly, Pharrell Williams, Tiwa Savage, WizKid, Yemi Alade, Jay-Z, and many others. There are also Tina Knowles-Lawson, Naomi Campbell, Lupita Nyong’o, Kelly Rowlland and model Adut Akech, who appeared in the clip Brown Skin Girl. Not to mention Ghanaian filmmaker and hip-hop artist Blitz Bazawule in the production team, British-Nigerian artist and director Jenn Nkiru, as well as creative directors Ibra Ake and Joshua Kissi.

Initially made to accompany the soundtrack of the Lion King: The Gift, Black is King is a celebration of Black American and “certain” African cultures.

Approaching themes such as identity, heritage and memory, Black is King is “a tale about a young king’s transcendent journey through betrayal, love and self-identity,” according to a press release by Disney. “The young king, is guided on his journey by his ancestors and loved ones, who help him to reclaim his home and throne. […] Black Is King is an affirmation of a grand purpose, with lush visuals that celebrate Black resilience and culture.”

Accused to be another irritating and narcissistic Wakanda–or Zamunda–before its release, it becomes clear after watching it, that things are a little bit more complicated. Beautifully anachronistic, visually fascinating and captivating, Black is King is a visitation of African and Black American cultures, through music, dance and spirituality. Far to simplistically homogenising the diversity of thousands of African cultures, it explores the traditions of different peoples such as the Yorùbá or Himba peoples, in order to rehabilitate Black American identity in its imaginary, but necessary royalty. Beyoncé’s greatest success remains her capacity to reverse colonial stereotypes over dark-skinned people (including African Indian descents), often associated with darkness, savagery and primitivism. Celebrating melanin and dark-skin inner and physical beauty, the American star associates Black to purity, spiritual elevation and high moral values. Without falling into some sort of mysticism, Beyoncé manages to rehumanise Black people through a reappropriation of animism and biblical symbolism. Like Moses for the Israelites, the birth of the future king, its rejection and final rehabilitation, mark the beginning of a new area, of deliverance and freedom of expression. By affiliating Black American diasporas’ journey to the one of the Hebrew people, Beyoncé also breaks with racial interpretation of the Bible, which put Africans and its diasporas at the bottom of human civilisations. Instead, she claims, for her people to be a chosen one.

But, despite its many qualities, Black is King raises a couple of issues that deserve to be brought to light. Although visually stunning, the film aesthetic hit some bum note. Permanently swinging between epic Afro-futurism and afrobeat style music videos, Black is King sometimes lacks coherence in terms of scene transition. Colour palette, as well as lighting, often goes from an extreme to another one, sometimes, in visually unpleasing way. In terms of storytelling, the work on sound was essential, since it fills some consistency problems in the narrative. Tracks and dialogues taken from the Lion King aim to guide the viewer throughout the story, but not without pitfalls, especially if you have not watched Disney’s remake.

The second and extremely obvious flaw of Beyoncé’s visual album is the Americentrism of her depiction of Africa, who tends to appear like a mythical Canaan, where modern Black Americans are given the opportunity to heal the wounds caused by their ancestors’ deportation, enslavement and systemic discrimination. But this Canaan imagery excludes most Africans from the narrative. Don’t be deceived by the appearance of many Nigerian or Ghanaian singers in the film who can let one believe that Beyoncé is targeting African audiences. She doesn’t. Lord Afrixana, Shatta Wale or Tiwa Savage are part of Beyoncé’s identity quest storytelling, a narrative addressed to her fellow Americans.

As well developed by Boluwatife Akinro and Joshua Segun-Lean, Beyoncé’s Africa is the setting for Black American broken imaginations. Unfortunately, it’s a peripheral and exotic Africa unrelatable to most Africans. The Americentrism of Beyoncé’s production tends to englobe the Anglo-Saxon world, while rejecting the rest. It obliterates the diversity of Africa and blackness across the globe and universalises blackness under the US history of oppression of black and brown people since slavery. In terms of message convey, it is very problematic given that most black people from Europe and the Caribbean tend to identify themselves to Black Americans, while insidiously internalising and transcending a suffering which is not theirs.

The final issue appearing in Black is King is… Beyoncé herself! Although she made efforts to step back a little bit, and to let the light shine on other talents to tell the story, she once more introduces herself as her favourite African deity since Lemonade: Oshun. “I am Beyoncé Giselle Knowles-Carter, I am the Nala, sister of Naruba, Osun, Queen Sheba, I am the mother.”

Yorùbá people should probably feel flattered by Beyoncé’s fascination for their goddess in “Mood 4 Eva”. However, the American singer’s narcissistic approach to one African religion poses the same recurring problem evoked above, the universalisation of Africa, this time under an exotic Nigerian aura. Just consider how different is Italian culture from Ukrainian or Serbian cultures. Wouldn’t you feel outraged if some stranger was telling you that Norwegian ancient religion was basically the same as the Romans or the Greeks’ because they are all Europeans? Well, imagine yourself explaining to an Ethiopian and an Angolan that there is very little difference between them and a Congolese, that there is no difference between Mami Watta, Oshun and Erzuli Freda because they are African in the end.

However, accusing Beyoncé of wankandification would be unfair, knowing the amount of work she put to represent different and recognisable African cultures, but the lack clarity of narrative mentioned earlier can confuse a non-African audience who can easily amalgamate the Igbo, Yorùbá or Himba cultures into one large ensemble, vaguely known as Africa.