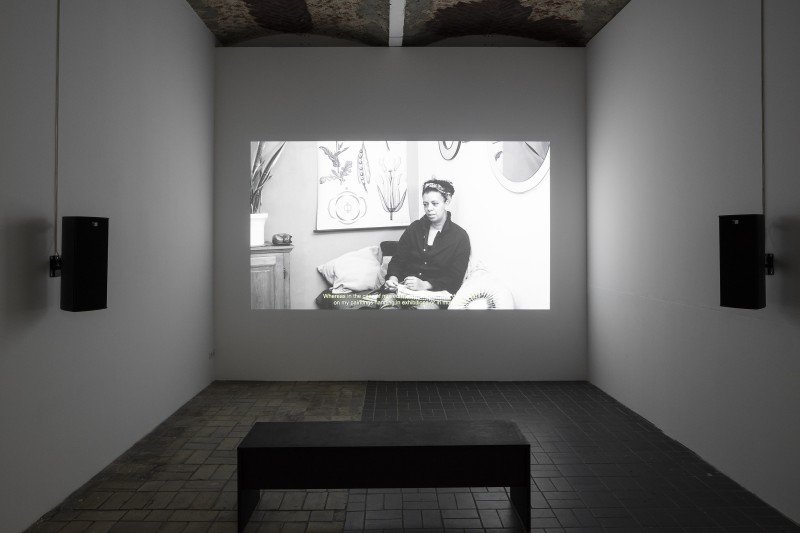 You know it’s Biennale season because there’s an uneasy air of low-key artsy sophistication everywhere. As expected, Berlin desperately wants to remain the coolest Art Metropolis in the history of everything. The weather is untypically cool one August morning after the great Hitze (heat) of 2018 as I channel my efforts into looking like serious art-person in the yard of the KW institute for contemporary Art, one of the Biennales locations in Berlin’s Mitte district. I performatively sip my Cappuccino, the one I paid for in cash because a cash-only policy seems to be the best way to avoid having to explain to privacy-obsessed art history students from the US why one doesn’t accept Bitcoin. Isn’t Berlin the Bitcoin capital of Europe?

The tenth Berlin Biennale, titled We Don’t Need Another Hero, closed its doors on September 9. Thankfully, the rave about the all Black curatorial team cooled off.

Gabi Ngcobo—the curator—is wrapping up a tour of the Mitte location with a group while her next interlocutors await. Could she please remove her sunglasses for the Camera, the TV crew from a major French-German media house promptly request. Soon, the interview is in progress a few meters from my table. Thanks to gentle wind, I am privy to occasional fragments of the conversation. Too many of the questions asked have been addressed on the Biennale website but Ngcobo answers with a patience many art-people would not have for an ill prepared journalist.

After the vast obsolescent pageant of irrelevance that the ninth Berlin Biennale was, expectations were running high for this edition. “They brought in the Black women to fix things” as a non-participating Afrodutch artist I meet later that day put it. Known as one of Europe’s more political art events, the tenth edition brought Berlin back to form by staging an anti-biennale that took refusal as a modus operandi seriously, giving us the ultimate ode to refusal, the I’m not who you think I’m not, a manifesto and loads of thought-provoking art.

We know from history that curt refusals have sparked iconic movements: by slapping a colonial official, Mekatilili wa Menza famously refused British colonial buffoonery in what is now Kenya back in 1913 By saying “Nah” Rosa Parks gave us the Montgomery Bus boycott in 1955. Similarly, there is a low key momentous air around the said (non) Manifesto. At once a call to action and a reminder that we already have (s)heroes, It invites us to consider going back and learning from those who already tried bringing imperfect utopias to life. Alternatively, imagine Bessie Head, Fela Kuti, Audre Lorde, Donna Kukama, Tina turner, Grace Jones, Nina Simone, Edouard Glissant, Fela Kuti, May Ayim, Jota Mombaça and the Fallists in a room together discussing the state of the world today. Oh how wonderful a concept trailer of this would be!

Nothing could possibly prepare me for Dineo Seshee Bopape’s massive room installation, which felt like an alternative reality where an activist t-shirt printing workshop (Lachell Workmanns contribution to the installation) meets a postapocalypse of strewn debris and an orange light hue meets clips of a Nina Simone performance and a Parisian park where humans were once exhibited in Zoos. Entering the installation was confusing: one knew neither where to look nor step, even seasoned gallery goers would be disoriented, not to mention feel-good art consumers. There was certainly nothing to be consumed here, save for the large hanging cardboard Discoball X (by Jabu Arnell) which with the right camera would surely gather a few double-taps on Instagram. In its totality, Bopape’s work was an unsettling initiation into some of the heavy issues that the Biennale gives a treatise of, short of prescribing neat tweetable takeaways. I left anxiously wondering what was (is) going on, a question (one hopes) many have been thinking about lately.

Even so, there were many non-imperative clarities, including the self-perpetuating nuisance that is White Supremacy: the subject of both Grada Kilomba’s and Mario Pfeiffer’s disparate, though distinctly scathing video work. While Kilomba packages said nuisance in the Greek myth of Oedipus, Pfeiffer brings it home, showing how it continues to structurally and institutionally manifest in Germany in Again/Noch einmal. Conversely, Natasha Kelly explored empowerment in Milli’s Awakening, likewise a video work with intergenerational portraits of Black Women and the Black Womens’ movement in Germany.

Minia Biabany’s Toli Toli awakened visitors to the realisation that ancestral knowledge can not only be written or spoken, but also woven. The bamboo fish traps that hang elegantly at the Akademie der Künste eschewed the artists’ unexpected struggle to find fishermen in Guadeloupe who were able teach her how to make them. Consequently, she aesthetically translates the horror of losing important ancestral knowledge that is often taken for granted.

Close by, in an odd inversion of the usual manner of viewing paintings, Lynette Yiadom Boakye’s A file for a Martyr to a Cause a multi-part painting, casually returned the visitors’ gaze from a seemingly moody and shadowy background. The gazer momentarily becoming the gazed upon.

Throughout, the Biennale was punctuated by refreshing formats such as a “discursive club night” hosted by Johannesburg’s Keleketla Library at Yaam, a performance dinner by Berlin based Isaiah Lopaz, and a visual spoken word performance by Koleka Putuma in cooperation with Berlin’s legendary archive Each One Teach One. Leaving the Biennale that day in August, I leave a space and place that hosted a necessary exercise in undoing, unlearning, unsettling and ultimately, decanonizing the global art canon. I leave with the realization that the power dynamics and male gaze that continue to shape the art canon are in an ongoing state of historical obsolescence. I leave knowing that It was time, that it has been time for a Biennale like this for a long time, one that reflects on and bears witness to a historical moment already in motion. After a Biennale like that, we obviously don’t need another Review. But then again, this is not what you think it is not.