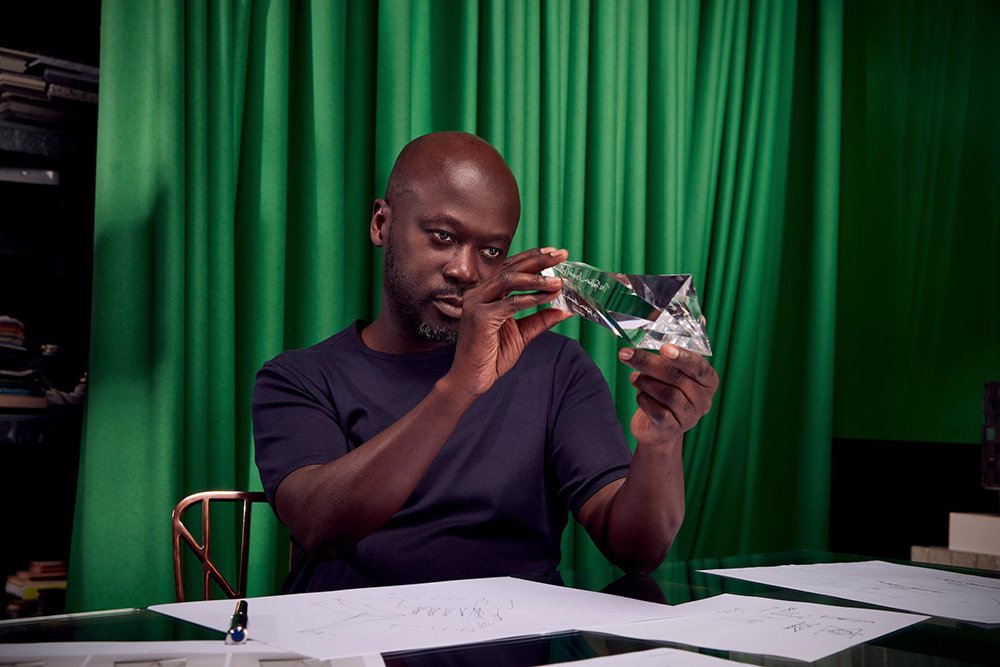 David Adjaye is a name that pushes one to pay attention, to have a sharp eye and keen ears, to take notes. “To me architecture is a form of human art, it means to humanise a construction, and art carries out a very important role in my practice,” said last year in front of a captivated audience of architects and enthusiasts—like me—who gathered at Maxxi Museum in Rome.

London-based Ghanaian-British, born in Tanzania in 1966 to Ghanaian parents, and raised in Africa and the Middle East before moving to London with his parents at the age of 13, the archistar Adjaye designed some of the most important and innovative projects throughout his career.

Light has a dominant role in his works accompanied by an ingenious use of other materials. If you have time, I strongly suggest you get lost in his instagram feed: you’ll be faced with his very personal visual sketchbook, featuring geometric shapes, colours, history, cultures and places.

The list of his works is long; it includes private residencies, shops, restaurants, social housing (Sugar Hill), museums, art spaces. To name a few, he designed the first Ghana pavilion at the Venice Art Biennale (2019), the acclaimed Smithsonian National Museum of African American History and Culture in Washington D.C (2016) and he has been recently tapped to design the Benin Royal Museum in Benin City, Nigeria. Commissioned by the Edo State government, the architect is currently carrying out a feasibility study, and last July he discussed his architectonic vision for the museum with the Benin Dialogue Group (the initiative was born in 2010 and consists of representatives from Edo’s federal state, the Royal Court of Benin, Nigeria National Commission for Museums and Monuments, and museum directors from Germany, Holland, Sweden, Austria and the United Kingdom).

In the future, the space will house some of the treasures looted during the colonial era from the Kingdom of Benin, such as the precious Benin bronzes stolen by the British troops in 1897. A historical event which is also recalled in some way in the blockbuster Black Panther, in one of the opening scenes when N’Jadaka – Erik “Killmonger” Stevens reminds the Museum of Great Britain director of colonialism’s theft and other crimes.

More than a thousand bronzes are showcased and housed in many museums and galleries across Europe (but also in the US) and the most valuable collection can be found in London’s British Museum.

For quite some time scholars, researchers and African governments have been demanding the restitution and repatriation of their artifacts. More specifically, Nigeria has been asking for the restitution of its bronzes since its independence in 1960. Meanwhile in Europe, Senegalese economist, philosopher and writer Felwine Sarr (author of Afrotopia) and French art historian, Bénédicte Savoy, wrote a 252 pages report on Emmanuel Macron’s request eloquently titled: The Restitution of African Cultural Heritage. Toward a New Relational Ethics. The debate is on. The Italian Academy for Advanced Study in America has decided to push the discourse forward by hosting the symposium The Restitution Debate: African Art in a Global Society next October at Columbia University.

Benin’s lost treasures is a topic particularly dear to Adjaye, as his spokesperson emphasised in a statement on Artnet, saying that the architect’s experience and interest in Benin’s cultural heritage show his personal and professional commitment in supporting the group’s efforts to ensure that this history will have its place in Nigeria’s present and future.

The restitution is an important, delicate subject, but can we talk about restitution if a time limit is applied? As a matter of fact, the British Museum has accepted to give back some of the artifacts, but only on a temporary, alternate basis at the moment. This is more like a loan, while the Nigerian members of Benin Dialogue Group demand the permanent restitution. Last year, Edo’s Governor spokesperson Crusoe Osagie told CNN: “We are grateful these steps are being taken but we hope they are only the first steps. If you have stolen property, you have to give it back.”

Surely it isn’t a simple thing to do, but surely it isn’t impossible and it’s something that has been long due, especially in the face of a cultural and historical heritage that colonialism violently ripped apart. We just have to wait till history will return home, and in a home designed by Sir David Adjaye OBE.