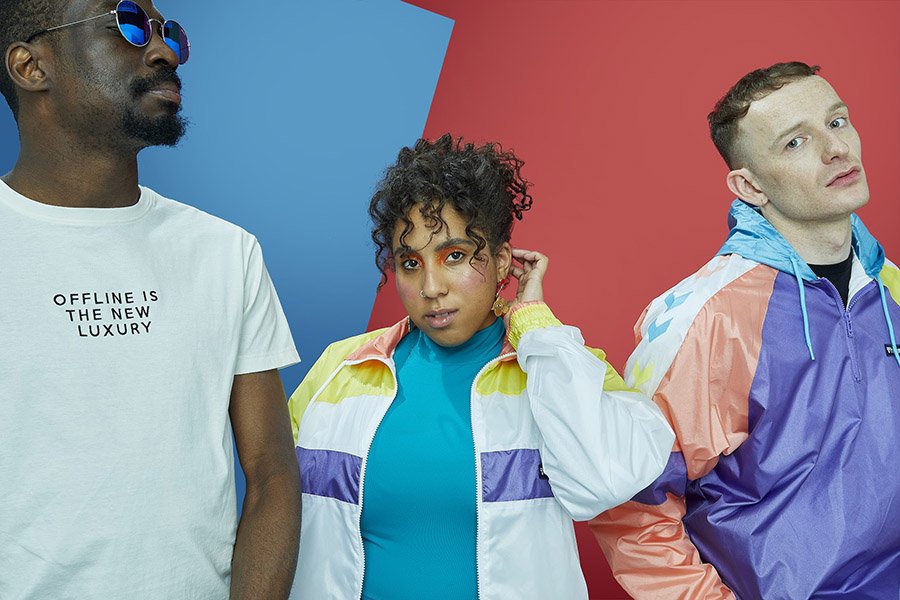 As much as noisy, chaotic and increasingly gentrified, big cities all over the world are cauldrons of creativity, diversified bustling interlinked communities generating ideas, culture and art, constantly setting new trends and costumes. No wonder London’s nightlife has been a catalyst for Benin City’s latest album, Last Night.

The British band, whose first full-length album, Fires in the Park, came out in 2013, went through many musicians and is currently formed by Joshua Idehen, Tom Leaper and Shanaz Dorsett, a formidable trio that sonically combines urban life, soulful words and truthful music. The group originally started as a collective doing jazz and afro-funk mixed with rap and, unlike many lead vocalists, Joshua Idehen comes from the London spoken word scene.

On the occasion of Benin City participation to Indie Rocket Festival (Pescara, Italy), we had a chat with Idehen on the evolution of the band, the new album, London’s nightlife and venues closure, the spoken word scene and more.

GRIOT: Joshua, Tom, Shanaz, you guys are three characters. What does each one of you brings to the team, in terms of personality and ideas?

Joshua Idehen: Tom is the musical director, he cares about arranging the sound, he’s aware of what sounds good and what doesn’t, and he also plays the saxophone. Shanaz is an incredible writer, on this album she provides a lot of the back in vocals, but she has also done a lot of writing in many of the tracks. I’m the lead vocal, I do writing and I come up with songs as well.

London is a huge part of your concept as your videos clearly show. What elements lie underneath this vision?

Well, I think the reason why London has been unifying us since the beginning is that it’s a big part of what we do as band. Tom was born outside London but moved here, I was born in London but I spent most of my life in Nigeria, I came back in 1999. Imagine The Moulin Rouge and Ewan McGregor seeing Nicole Kidman for the first time, well I’m Ewan McGregor in that case.

I’m jsut very naive, wide-eyed, optimist as I view London and what it can be and it’s mostly a very romantic idea of what it’s like, of how big and diverse is. It is mostly a very romatic idea of what it’s like, how big and diverse it is. Also Shanaz’ parents are Turkish Cypriot and Montserratian, she’s a real r’n’b head. The three of us always bring extra influences, I’m a big fan of kwaito and afrobeat and—of course—I’m from Benin City myself, so a lot of my references also come from american movies and a lot of elements of Highlife music. Tom is a Grade A musician, a big fan of jazz and classical music and the fact that we all live in London with all these outside influences is our common base. London is like a prison that we can push all of our lives through and come out as a unifying rainbow.

Last Night is your latest piece of work, coming out on June 15. Four tracks are already out, what can you tell me about the rest of the album?

We felt that we wanted a chance to actually look at London’s nightlife, cause we all had different experiences. I used to work in bars in the West End, Tom used to go to a lot of bars, in fact that’s where we started. We were talking about all of these places that we had been to and performed in like, Passing Cloud, Plastic People that are now closed. Shanaz had her experiences as well and we knew that in part it’s because we are getting old, but also because of gentrification. So we wanted to write about good night life experiences, the ones that are not often celebrated and talked about. We wanted to cherish night life, support it and crystallise it and not just talk about it from a point of view of clubbing and good vibes.

Spoken word is finally a thing and that’s were Benin City has its roots. How do you feel about the rise of this beautiful form of art that has been neglected and kept a niche for too long?

It’s funny cause I’ve been doing spoken word for longer than music and I’ve seen artists explode into the scene and everyone goes “spoken word is big now” and then that artist goes off and does his own thing and the scene quiets down until it happens again.

Spoken word is constantly celebrated as up and coming and this is the most sustained as a breakout period there’s has been. That is partly because of the work of people like Roundhouse, Southbank, Apples and Snakes etc. to constantly entice new artists into the art form and mentor people that go on to do great things. Also, social media has been a real boom for spoken word in the sense that you are no longer confined in cafes, without a microphone or something, you get your people and your spoken word on Soundcloud.

In this day and age when there’s a high distrust for media and truth is fragmented and no longer centralised as it used to be, people go online to find new stuff and get new opinions, which has got both really positive and negative elements, but what that meant is that people searching for truth have got a lot more avenues. And spoken word—I found—is a form of art based on someone’s honesty and values, because when you’re out there performing spoken word, what you talk about—nine times out of ten—is yourself and people are drawn towards that kind of honesty and directness, zeroing on the issue and the emotion without any filter or other bullshit. That is a great thing and as someone who is in part of the scene, it’s good to see artists get the recognition that they deserve. How long is it gonna last? I don’t know, I think social media really opened the pandora’s box, so let’s see where we go from here!

As part of their summer tour, Benin City will perform at Indie Rocket Festival in Pescara (Italy) on June 30. Find more info here.