Azulejos By Populous | Digital Cumbia And Sense Of Civic Duty 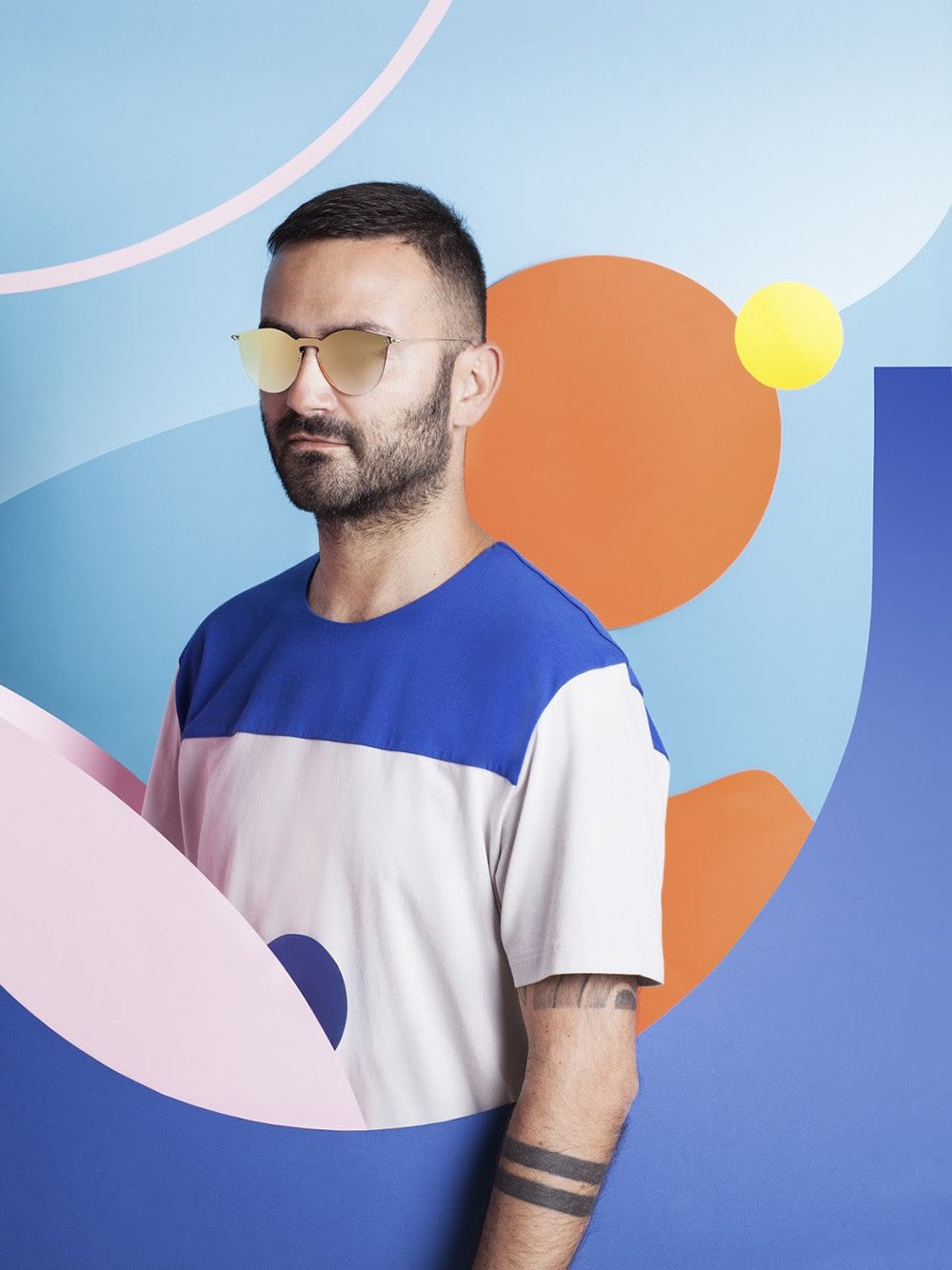 Ocean, gold, colour, cities, dance, movement, rhythm: these elements are the ethos of Popolous’ new album, Azulejos. After two months in Lisbon the Italian producer released a record that follows the latest tribal-percussive current inspired by the Angolan-Portuguese tradition and the South American sound of Cumbia, a musical journey that many other Italy-based artists like Clap Clap and Montoya have now joined.

Azulejos is a thoughtful record with strong visuals which translate music into images through lively chromatic games and inebriating geometric shapes.

We had a long Skype call with Andrea, we talked about how Lisbon has changed him, about the beautiful videos edited by Emanuele kabu, about his new collaboration with Enchufada, his summer tour, his wonderful land, Salento, and his strong sense of civic duty.

GRIOT: It gives me great pleasure to have this chat with you because we have a lot in common, especially the love for the new Portuguese music scene. Who are your favorites?

Popolous: I’m friends with all the guys at Enchufada and a big fan as well, so I’m going to say Branko, Rastonaut, KKing Kong, Dotorado Pro. And then all the guys at Principe Disco, Dj Marfox is one of my heroes. As for Lisbon, I must be honest, I’ve always loved Batida because it’s so close to the vibe I want to create with my music, you feel good when you listen to his productions. He was one of those artists who gave me such a positive image of Lisbon that I then wanted to try and do the same with my record.

Though there’s so much stuff  in Lisbon, for example Xinobi and Moullinex. I really like them and when talking about remixing some of the tracks, I spontaneously thought of their names as well as Branko’s, Rastronaut’s etc, perhaps because they could come up with a new cool interpretation. Obviously it’s all work in progress, we’re focusing on the promotion of the album at the moment, then we’ll see whether to do a remixes EP.

How has Lisbon changed you?

It has definitely affected my mood and personality in a way, because when I left Lisbon and went back to Italy many people who know me well noticed that I was a lot more relaxed about certain things. I think I had lost my frivolousness and I didn’t care about was I was wearing. Lisbon makes you understand what is important in life, so you don’t stress about unnecessary things like you would do in cities like London or Milan where people will somehow make you feel uncomfortable if you don’t conform. When I was there I just didn’t care, now of course I’ve lost that spontaneity again.

What about the filmmaker behind your videos, he’s not from Portugal, is he?

Correct, he’s from northern Italy and his name is Emanuele Kabu. He has lived in London for a long time. He is amazing, we worked for Little Dragon, Adult Swim, RHCP and he often collaborates with SubPop Records, Seattle. I’ve known him for years and after going through lots of more “traditional” ideas, I decided to represent the tracks in a more graphic way. After all, the album is called Azulejos, like the typical portuguese ceramic tile work, so it naturally recalls vivid colours and geometric patterns. So I contacted Emanuele and when he sent me the clip I was so excited that I immediately decided to go for another video.

It was great to work with him, because he’s very understanding and he’s not one of those filmmakers who are pushy and don’t listen. We’ve had infinite Skype calls, I sent him my Instagram shots and the email exchange I had with Ela Minus when we were composing Azul Oro, I told him all the anecdotes. So we kind of created the videos together, but of course he did everything graphically speaking.

I can certainly see the places, the colours and the geometry you mentioned in Azulejos. While Azul Oro is more abstract, why?

Yes, Azulejos is a very real representation of Lisbon, where all the elements are inspired by the Instagram pictures I took when I was there, it is a sort of city that runs on the screen. While in Azul Oro the idea was a bit more complex, so we went abstract because we wanted to represent three different countries: Portugal, with the beaches and the ocean; Colombia, Ela Minus’ country of origin, with palm trees, toucans, fish and nature; The latter place is the United States, particularly New York, where Ela lives and wrote the piece. We wanted to connect three very different places, for New York we used the Chrysler Building, other skyscrapers, the Metro card, the Ghetto Blaster and the Coney Island wheel [Wonderwheel, the label that released the album was named after it, what a coincidence!]

The lyrics says “Todo cambia con la luz” [Every thing change with light,] so we had to make sure everything transformed, alternating real elements with graphic patterns. And then finally there’s a lighthouse! I love lighthouses, I even tattooed one on my arm. The one in Capo de Roca is gigantic, it’s “the” lighthouse, a welcoming sign for all those arriving to Europe, so we had to included it in the video.

I have to say there’s a concept behind everything and a great attention to details.

Yes, not everybody get it. Many also don’t notice that I used the same sounds and samples in all the tracks of the album. I’ve never done it before, but I figured it as a one-man band and bands have their instruments and only play those. Electronic music is different because you have such a wide choice that music loses a bit in terms of identity. I wanted to give continuity to the songs.

Will you ever do something with the sounds of Puglia’s music tradition?

I never thought I could answer this way, but yes, I will. The traditional music of my area, Taranta, is based on rhythm as well as Prince Discos’ productions develop from layered rhythms and drum patterns.  It is basically the same concept. My initial idea was to make an album related to rhythm with a very few melodic elements.

However, being a musicology graduate and having such a broad musical background, I obviously wasn’t able to stick to the plan. I have to say that compared to my previous works, Azulejos is a much more drum-focused record, closely related to the idea of ​​popular music. So, yes in a sense it’s like I’m getting closer to the concept of popular, traditional music.

Don’t you think the success of global bass and the strong diversity it implies it’s a paradox in such harsh times for what concerns the openness to cultural diversity in Italy?

Well, what we’re talking about is a minority of people with a much more open vision. Outside this closed circle in the streets, it’s not the same. We are now trying to push this discourse, finally talking about African, South American, Caribbean music and so on. It’s almost becoming mainstream, but only because a group of people have decided that this stuff has to be cool, but not everyone is ready to understand it.

I took this responsibility and I’m now trying to push digital cumbia in Italy. I do not care if people think it’s Zumba music or Despasito 2.0. I don’t care, I just do it.

A while ago you posted: “It’s really nice to hear that a lot of exciting things are happening in Puglia (festivals, conventions, amazing gigs etc.). However, I hope that all this goes hand in hand with a sense of civic duty that is sadly still lacking […] “- Can you explain it to me?

It’s very simple, Puglia is beautiful and they have been organising beautiful things in the last few years. But I always feel that people don’t care much. For example, yesterday I went to the beach and found a sofa cushion near a rock in the water. I pulled it away out with other rubbish that was lying around, I took everything to the top of the cliff. When I asked at the kiosk if there was a bin, they almost did not let me throw away all the stuff I had collected, I had to raise my voice.

It’s a joke, it’s their business but if the beach is polluted they lose customers. I think people haven’t realised the potential of this land yet. Salento has become the place to be for spring and summer holidays in Italy and it conveys a very high number of tourists. The locals have to understand, what am I supposed to do more than writing post after posts and inviting people to be civil?

Speaking of seaside, plans for the summer?

I’m starting my tour and I’ll be doing more dj sets in party situations than live shows. Azulejos live, will be an audio-video show, so I’m going to work with a filmmaker who will make especially designed videos for each track, it will be an interactive thing. Then there’s my new track on Branko’s compilation.

I had the pleasure to play with Branko at night for Reebok in Italy, he is a really nice person. When I went to Lisbon he saw my Instagram pics, so he asked to meet and invited me to play with him for the inauguration of Park Bar, a wonderful rooftop bar in the center of Lisbon, it has one of the city’s most beautiful views. Long story short, while I was there the Enchufada’s guys at some point asked me to work on this compilation called Enchufada Na Zona that will be out on July 7th.