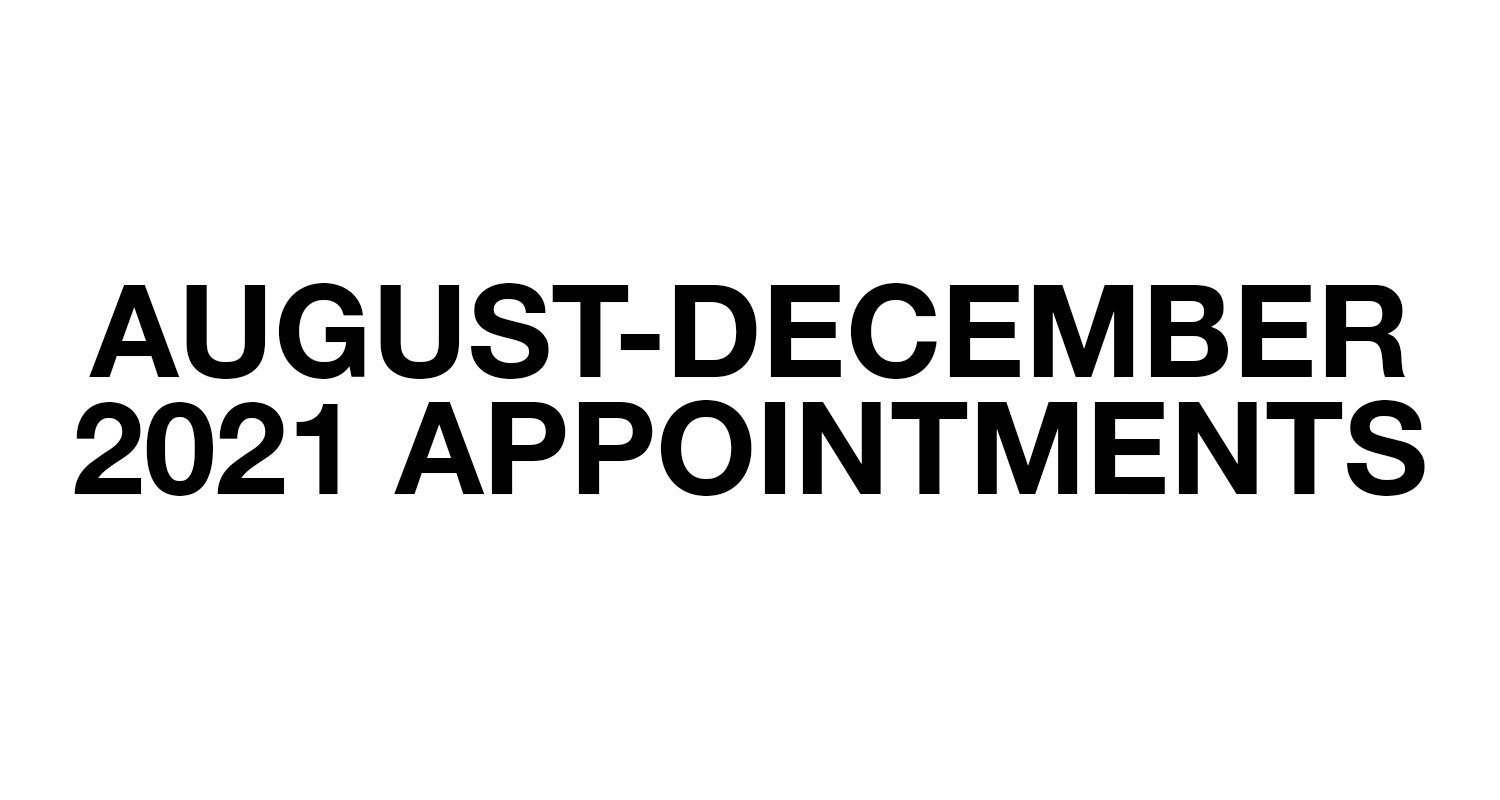 Scottish-Ghanaian architect, academic and novelist Lesley Lokko has been appointed to curate the Venice Architecture Biennale in 2023, becoming the first Black architect to lead the biannual event. Lokko, who is the founder of the African Futures Institute in Ghana and editor-in-chief of FOLIO: Journal of Contemporary African Architecture, will oversee the 18th edition of the prestigious architecture exhibition.

Her appointment marks the first time the Venice Biennale board—currently led by president Roberto Cicutto—has selected a curator of African descent. It is also only the third time a woman has been chosen, following Kazuyo Sejima in 2010 and Yvonne Farrell and Shelley McNamara in 2018.

Stephanie Sparling William has been appointed the Andrew W. Mellon Curator of American Art, and Kimberli Gant has been appointed the Curator of Modern and Contemporary Art at the Brooklyn Museum. Sparling William joined the staff in December 2021. As the Andrew W. Mellon Curator of American Art, she will oversee the interpretation and presentation of one of the museum’s oldest and most celebrated collections, consisting of more than 1,400 paintings and sculptures from the colonial period through 1960 as well as more than 4,500 works on paper.

In collaboration with the curatorial team, Sparling Williams will shepherd the museum’s mission to expand the art historical canon by highlighting underrepresented narratives, including those of Black Americans, indigenous peoples of the Americas, and women. Sparling Williams will also help to lead the Council for African American Art, with the goal of supporting the acquisition, study, conservation, and presentation of the Museum’s collection of African American art.

“I am indebted to the accomplished colleagues who came before me; particularly Terry Carbone, who reimagined and greatly expanded the American Art collection during her tenure, as well as Rujeko Hockley and Ashley James, who contributed important exhibitions that reflected the fullness of contemporary American art and cultural life,” says Sparling Williams.

Gant will join the staff in January 2022 and guide initiatives to strengthen the development, research, presentation, interpretation, and growth of the museum’s modern and contemporary art collection, with a special emphasis on the African diaspora. This new curatorial position will reinforce and enhance the Museum’s dedication to art and histories of Black and brown artists and communities through transformative engagement with exhibitions, collection installations, public programs, and collection expansion.

“I’m thrilled to be returning to New York, particularly Brooklyn, and to be able to work at the Brooklyn Museum, an institution I’ve admired and appreciated for years. I hope to add to all the amazing opportunities already occurring and am excited to work with such an incredible team of museum professionals,” says Gant.

Kimberli Gant recently held the position of McKinnon Curator of Modern and Contemporary Art at the Chrysler Museum of Art in Norfolk, Virginia. Gant has extensive experience in the presentation of collection-based shows in addition to exhibiting emerging and established artists across the African diaspora.

The Museum of Contemporary Art Chicago has appointed Jamillah James as senior curator. She will begin in her role early next year. James was previously senior curator at the Institute of Contemporary Art, Los Angeles (ICA LA). She is also co-curator of Soft Water Hard Stone, the 2021 edition of the New Museum Triennial, the international exhibition in New York devoted to emerging artists from around the world, that runs until January 23, 2022.

Prior to joining ICA LA in 2016, James was assistant curator at the Hammer Museum in Los Angeles, and has held curatorial positions at the Studio Museum in Harlem and Queens Museum, New York. She produced exhibitions and programs at various alternative and artist-run spaces throughout the United States and Canada since 2004. James’s appointment marks a return to Chicago, as she was part of the first class of art history graduates at Columbia College in 2005.

“Visiting the MCA helped me realize the possibilities of curating and of museums,” James said. “The city of Chicago is home to an incredible community of artists, and I am humbled by the opportunity to be an advocate for them as part of the MCA’s team,” she siad.

Marcus Tebogo Desando has been appointed new director of the Prince Claus Fund. He will take up the post in Amsterdam beginning 2022.

Tebogo Desando has been CEO of The Arts and Culture Trust, Johannesburg, since 2017. Prior to that, he was the CEO of Gauteng Opera in Johannesburg and Artistic Director of BTE VO1SS (formerly Black Tie Ensemble). He is a professional singer who has directed, conducted and performed in South Africa and with international companies such as Really Useful Artists and New York Harlem Productions. Marcus Desando has become a driving force in the development and training of young South African artists and aspiring arts administrators.

“It is with great honor, humility, and excitement, that I will be joining an organization that has put culture to the fore and has shown the value of investing in uplifting creatives and celebrating their contributions to the world at large. As an incoming Director of the Prince Claus Fund, I am even more excited by the new strategy to focus on individual artists and cultural practitioners as it will allow for progressive and meaningful engagements throughout all its programmes. I am looking forward to positively contributing to the continued success of the fund and its future.”

Dia Art Foundation appointed Jordan Carter to the position of Curator. With a specialization in Fluxus and global Conceptual art of the 1960s and ’70s, Carter will play a key role in Dia’s commissions, exhibitions, acquisitions, and public programming across its eleven sites. Carter goes to Dia from the Art Institute of Chicago, where he held the position of Associate Curator of Modern and Contemporary Art. Carter began his role in December 2021.

“I am thrilled to join Dia Art Foundation and to collaborate on a program that honors the institution’s history while advancing its role as a vibrant and essential hub of radical hospitality—hosting artists, publics, and risk in ways that let the outside in,” said Jordan Carter. “I look forward to contributing to Dia’s mission of championing and expanding the histories and legacies of Minimal and Conceptual art of the 1960s and ’70s, and engaging living artists in sustained and meaningful ways that extend these stakes and dialogues into the twenty-first century.”

From 2015–17, Carter was a Curatorial Fellow at the Walker Art Center. Prior to his time at the Walker, he was the twelve-month Fluxus Collection Intern at the Museum of Modern Art (MoMA), New York, where he researched, catalogued, and organized displays of MoMA’s Fluxus collection. He has also held curatorial and research positions at the Studio Museum in Harlem and Centre Pompidou in Paris.

The New Museum in New York appointed Vivian Crockett as curator. Crockett joins The New museum from the Dallas Museum of Art in Texas, where she served as assistant curator. She will assume her new position on January 1, 2022.

With a specialisation in Latinx art and African diasporic art, her projects at the Dallas Museum included the solo exhibition  Guadalupe Rosales: Drifting on a Memory and Slip Zone: A New Look at Postwar Abstraction in the Americas and East Asia.

A graduate of Stanford University, Crockett is currently completing her PhD in art history at Columbia University, with a dissertation on the participatory and media-based work of Brazilian artists Hélio Oiticica and Lygia Pape. She has published scholarly papers in publications from institutions including the Metropolitan Museum of Art, The Museum of Modern Art, The Studio Museum in Harlem, Leslie-Lohman Museum, and MASP (Museu de Arte de São Paulo), among others.

Find out more about the new appointments.