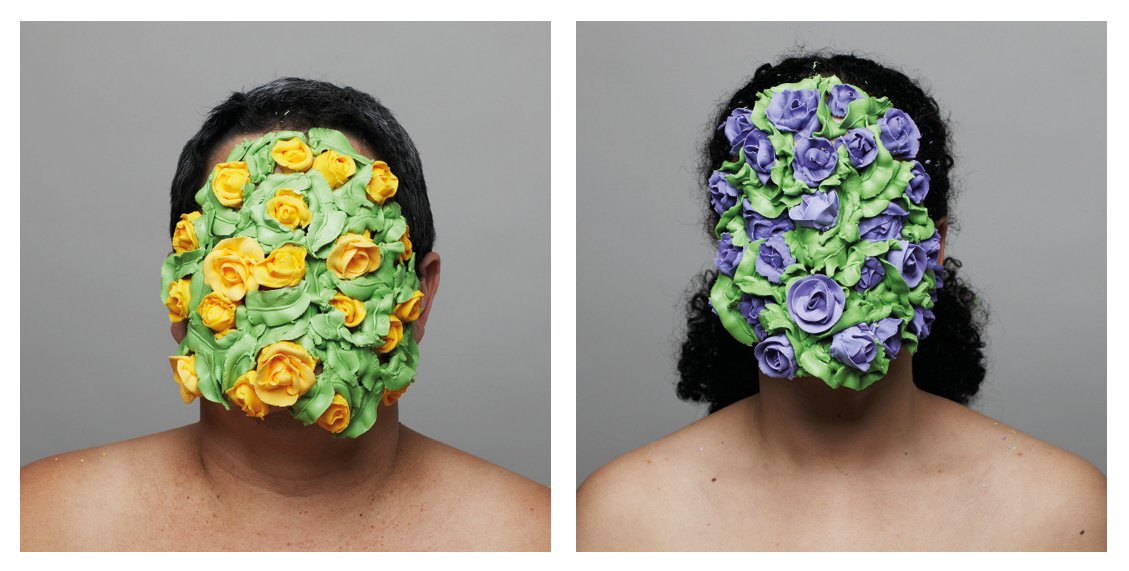 Keisha Scarville’s mother left the South American country of Guyana for the USA in 1967. Growing up, Guyana was part memory and part imagination for Scarville, “stitched together like a patchwork by what my parents carried with them and reassembled here in America, and my own experiences during short visits to see family”. As the visits became fewer over the years, the country has became a myth, “a form of home and motherland”. When Scarville’s mother died in 2015, the artist photographed herself in her mother’s clothes as part of a long process of mourning. In the photographs, the assemblage of clothes hang as “a residual surrogate skin” creating complex portraits of a “mother(land)”.

Scarville’s is one of fourteen artists of Guyanese descent telling their stories in Liminal Spaces, a new book edited by curator and NYU-Tisch assistant professor Grace Aneiza Ali. The book subtitled Migration and Women of the Guyanese Diaspora is one of the most comprehensive overviews on the Guyanese diaspora ever published. Being the only South American nation in which English is the official language, Guyana is tconsidered part of the Anglophone Caribbean, and many Guyanese migrate to North America. The majority of the population, however, speak Guyanese Creole as a first language. The photographs, letters, installations, video stills and digital collages interspersed among the narratives allow a glimpse into biographies and artistic practise, while providing crucial information about the life-courses of Guyanese women from different generations.

“What she remembers is what I remember”, writes Erika DeFreitas, another contributor to the volume, about her mother’s memories of Guyana. “It is all fragmented and disjointed and pieced together in ways that may or may not make sense”. Erika’s mother Cita left Guyana for Toronto in July 1970, and has never been back since her mother’s death in 1980: “she does not want to see how it has all changed”. Both Cita and her mother, Angela were cake makers, and the letters and photographs that Erika references in her artistic work often feature cakes. “I am working on a wedding cake for Saturday” Angela writes in an undated letter to her daughter sent between 1973 and 1975. In the diptych The impossible Speech Act (2007), the artist and her mother are photographed wearing face masks that cover their entire faces. The masks are made of green, yellow and purple icing, which they hand-fashioned based on Angela’s teachings. The process is ambivalent for Erica, who is unable to connect to her grandmother’s memory as easily as her mother can. Erika DeFreitas, The Impossible Speech Act (detail), 2007 – Courtesy of the artistLike many in Guyana, Suchitra Mattai’s family came to Guyana as indentured servants. As a consequence, her work investigates the idea of an invented homeland by using domestic objects such as furniture, macramé, found photographs, thread and crockery. In Promised Land (2016), a video made on Mattai’s journey by ship across the Atlantic to retrace her Indian family’s steps is projected onto a headpost. We see the ocean and the sky, vast shades of blue that invoke the idea of forcibly domesticated heritage. For the artist, the work conveys both bondage and freedom because it speaks to past, present and future homes simultaneously.

In Christie Neptune’s 4-minute video work Memories from Yonder (2015), she interviewed elderly female immigrant seniors from Guyana to find out what happens when one’s cultural foundations have shifted because of a new cultural landscape. She weaves together her own family narrative with the story of the 90-year old Eubora Calder who crochets a red bundle of yarn while speaking about her immigrant experience in the US. Her fondest memory, she recalls, was crocheting by the window while watching the snow fall. A popular recreational activity among Guyanese women, crocheting for Neptune takes on symbolic meaning. It is a mode of home maintenance, a way of reasserting over and over again that a place is home, so much so that the act itself becomes a proxy home.

Conceived as a visual exhibition on the page, Liminal Spaces brings incredibly timely insights on the Guyanese diaspora to the fore. Through artworks, it is able to cover more ground than a classic scholarly analysis would be able to, while making it accessible to different audiences. As one of the only contributions of its kind, its importance cannot be overstressed.