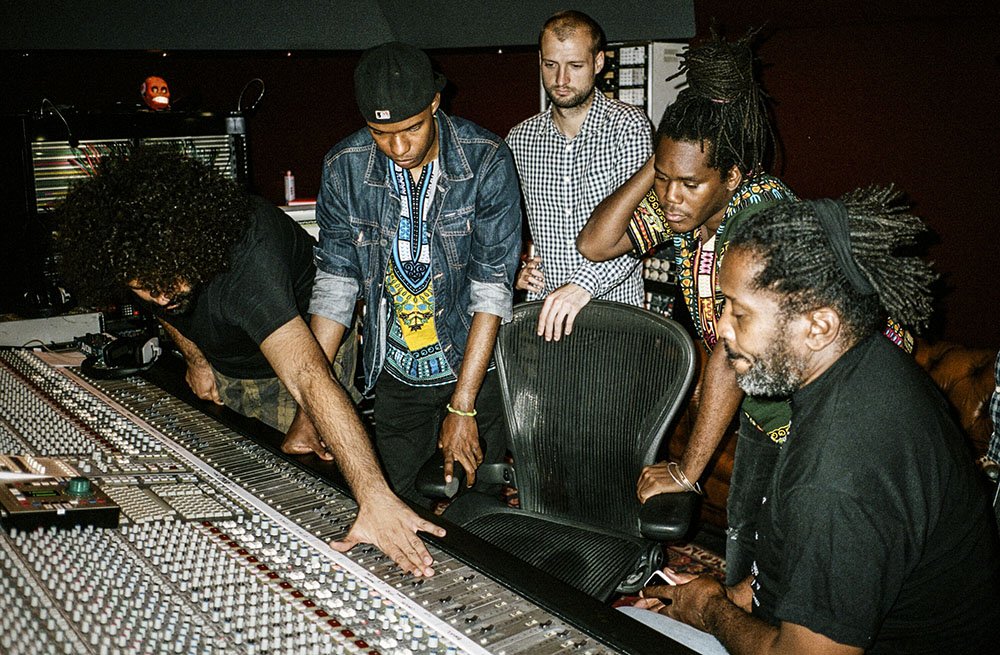 Two years ago while surfing on the net, I bumped into a Kickstarter campaign raising funds for the first Afro-Cuban and Electronic Music Festival in Santiago de Cuba, Manana festival, created by Harry Follet and Alain Garcia Atola and held in May 2016.

Few months after that discovery, I started organising my trip to Cuba (I should have gone in the summer, anyway). I couldn’t miss the opportunity to witness the intersection between the oldest and newest sounds created by Cuban musicians and the electronic sounds pushed by internationally renowned electronic music producers and djs, each one bringing his own distinctive style.

Unfortunately my plan to go to Cuba failed, but I managed to interview one of the organizers of the festival. Between the many artists involved were Ariwo, a Cuban/Iranian quartet made of Iranian electronic composer, Pouya Ehsaei, and three of London’s most influential Cuban musicians: Oreste Noda, Yelfris Valdes and Hammadi Valdes.

The band focuses on the unexplored intersection between electronic and Afro-Cuban folkloristic music, combining the raw energy of Cuban rumba shows with the deep melancholy of Iranian electronic music, even if they are now deviating from the pure Afro-Cuban rhythms they explored at the beginning of the project.

We had a chat with Pouya Ehsaei, the initiator of Ariwo. They will be performing for the first time in Milano next week, at Linecheck.

GRIOT: Pouya, you are the leader of Ariwo. Can you tell me more about your relationship with Cuba and what has led you to experiment with this fusion of sounds?

Pouya Ehsaei: For me Cuba was a serendipitous encounter: one of my friends (Harry Follett) came back [to London] from an inspiring trip to Cuba with the idea of organizing a music festival in Santiago de Cuba. The festival would mostly consist of collaborations between electronic musicians from around the world and Cuban musicians and bands. To present the core concept of the festival, we started Ariwo in London to showcase the possibilities of electronic explorations in Afro-Cuban rhythms and melodies.

This was particularly interesting for me because I really like experimenting with new musical ideas and material. I did not know that much about Afro-Cuban music before Ariwo, and it made the process more adventurous and spontaneous for me. What I did not predict was the joy of playing live with three incredible Cuban musicians and the flow of energy between us on the stage. This was particularly interesting for me because I really like experimenting with new musical ideas and material. I did not know that much about Afro-Cuban music before Ariwo, and it made the process more adventurous and spontaneous. What I did not predict was the joy of playing live with three incredible Cuban musicians and the flow of energy between us on the stage.

There are some projects around which seek to promote Iran’s creative diversity and celebrate contemporary artists, and I feel that they are mainly projects resulting from the Iranian diaspora. I can recall Reorient magazine (Canada) and the recently founded Cama Gallery (London). You’ve gone further. Together with Hammadi Valdes, Oreste Noda and Yelfris Valdes you are merging Iranian mysticism with Afro-Cuban traditional rhythms and electronic sounds, and the final result is so harmonious and spontaneous. How hard did you work to achieve this result? Was it immediate? Were there sounds that initially prevailed more than others?

It almost happened instantly. At the first rehearsal session, I just started playing my ideas with my electronic instruments and everyone just tuned in and we had an incredible jam. My main idea was to make a dark sound space filled with energy where all the band members can express themselves freely with references to Dub Techno, Minimal Techno, Experimental Jazz and Distortion Music (yes, that’s a made up word).

When you have a solid idea about how you want it to sound and the band has that natural synergy since day one, making music comes down to leading the way and picking the good moments and discussing the desired repetitions, transitions, breaks, energy levels, spaces and dialogues to get what you want. I never tried to force my ideas on the band in any way and it all came naturally. Everyone else in the band is involved in the process and they are all masters of their own craft. I think this comes across through the music as well.

While listening to ‘Caldera’ my trips to Istanbul and Cuba came back to my mind, and I immediately figured whirling dervishes accompanied by an orchestra made of Valdes, Noda and Valdes. Ariwo is a very interesting experiment and these kind of projects are well received in Europe, which is the continent where you live. However, I wonder how Ariwo is perceived in your home countries? How much exposure do you get? Which type of people are most interested in these sounds? And how important is it for you to talk about Ariwo and share your music in Cuba and in Iran?

I like to share whatever I make with my “fellow Iranians”, and if they connect with and appreciate Ariwo’s music it will, of course, be thrilling for me. A Cuban-Iranian collaboration was an unexpected turn in my career, for myself and for those who knew my music. I am going to Iran for the first time since the release of the album in December and I will be able to see on the ground what the overall reaction is.

We haven’t had any marketing or album sales in Iran and any circulation of the music has been through personal networks. We are a live band – the whole album was recorded live in the studio in one take – and I would love to perform live with Ariwo in Iran, where there is a wide community of electronic music enthusiasts with a good ear for music.

We played at Manana festival in Santiago de Cuba and the response was phenomenal. The feedback we got was a mixture of explosive reactions, flow of emotions and curiosities. It was amazing, one of my favourite gigs. People received us with open minds and transcended us with their energy. There is further interest from venues in Havana to host us and we look forward to sharing our more recent works with the Cuban audience.

In 2015 you set off with a Boiler Room performance, in 2016 you made your debut at Manana electronic music festival in Santiago de Cuba (speaking of which, I met Alain Garcia Atola in Santiago in summer 2016, but as I said I didn’t make it to the festival) and this year you released your self-titled EP. So, two years after the project began, what would you change, what would keep for this project? Do you feel like you have reached the right balance or do you want to push your experimentation further?

(It would have been great to see you in Santiago but I’m sure Milan will be as good.) The goal of Ariwo is to make a sound space that is at the same time new and traditional, familiar and peculiar, energetic and contemplative, simple, straightforward but full of details. We have come a long way so far but there is still a long way to go and that is what keeps me going. Ariwo’s new material is a bit more geared towards electronic music listeners compared to our first album. We are deviating from pure Afro-Cuban rhythms as our starting point and trying to find a new groove for the next release. So far, this approach has led to a more immersive and hypnotic sound space that takes the listeners on more internal journeys. We are playing three unreleased tracks at Linecheck and we are looking forward to seeing the reaction of Milan’s musicheads to our new work.

I don’t look at what we’re doing like genre-specific or related to any particular culture or community. You can make a unique sound space with any given starting point and raw material. I like to think in the core of all of this different projects I am involved in, there is an undercurrent of musical ideas and sensational expression that is referable to me as an artist.

Ariwo will perform on November 24 at Linecheck Music Meeting and Festival, Milan. You can find more info here.

All images | Courtesy of Ariwo