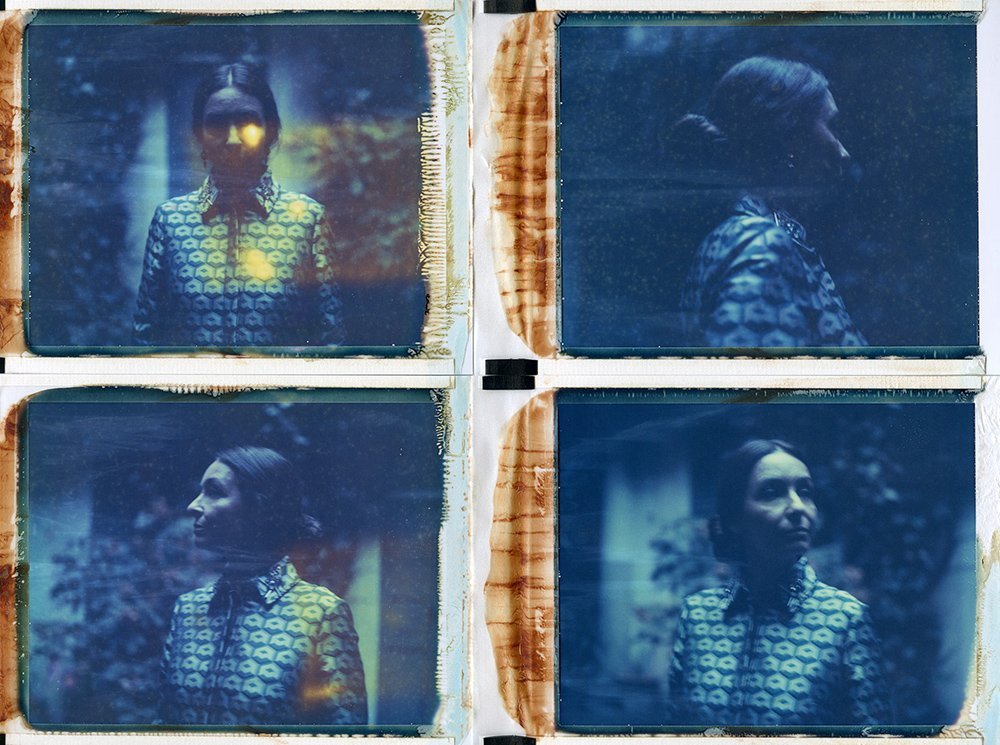 Photo by Alberto Zanetti - All the images | Courtesy of Alessia Glaviano

For those who work in fashion and photography, Alessia Glaviano should be familiar. Sicilian by birth and Milanese by adoption, she has worked for one of the most authoritative long-running publishing houses in the world,Vogue Italia, since 2001.

Since she started at Vogue she has come a long way, supported in her aesthetic and social vision by both Franca Sozzani, the magazine’s iconic editor-in-chief until her passing in 2016, and by the current chief editor, Emanuele Farneti, who entrusted her with curating the aesthetics of the Vogue Italia brand.

Ahead of the fifth edition of Photo Vogue Festival (30 October-22 November; 19-22 November), Alessia Glaviano and I retraced her beginnings in the fashion universe. We discussed her love for beauty and attention to social phenomena—which she remains a keen observer of— as well as the forms of protest that should find more space inside Vogue Italia and the nostalgia for a magical world that seems to be lost.

Alessia Glaviano: I won’t hide the fact that I’m dissapointed, but in this historical moment that’s the way it is. We must try to do the best with what we have and focus on the positive aspects, which are the total democratization of the event that will now reach the whole world, and the infinite creative possibilities that a digital platform offers. Of course, I hope to meet everyone in real life soon.

Everyone knows that you are the Brand Visual Director at Vogue Italia. Tell me who Alessia Glaviano is besides Vogue.

To be honest I don’t have much other than work … I don’t have a partner, I don’t have children. I have a disabled mother, whom I take care of. I have many friends, but ultimately my passion is my job. I don’t understand the concept of free time, in the sense that yes, I would love to live in the mountains and go for walks, but I would still work from there.

Since I was a child I have always had a great interest and a strong sensitivity for social issues, as well as art and beauty. I feel lucky, because I managed to create a career that suits me, that brings these passions together in a field where being allowed to do so isn’t obvious. I think the historical period also helped because in the last twenty years, fashion photography has become more political. It always has been, but even more so today thanks to the reach that social media allows. Just think of the representation discourse which I also explored with you at the last edition of Photo Vogue.

Seeing bodies, faces that represent you in all aspects of culture is political. Magazines and brands developed an awareness of this politicisation. So if you want — thinking of the many forms of diversity and representation — there is an audience that understands, that acknowledges these issues but above all creates the right mix for all this to happen.

However, you are the daughter of Marco Glaviano, a renowned fashion photographer and architect. In 1995 he designed and co-founded Pier 59 Studios in New York. You are also the great-granddaughter of Gino Severini, a prominent cubist and futurist painter, and the granddaughter of the sculptor Nino Franchina. How much has this lineage influenced the choices that led you to be who you are today?

Yes, I admit that I was lucky to grow up in a family where culture was very important. Even though we don’t realise it as children, if every week you’re taken to see an exhibition, a museum; if jazz musicians come to jam at your house, obviously that shapes you.

I graduated in Political Economy, I used to imagine a different path for myself like working for some international organisation, helping developing countries —I had even written two papers when I was at uni. After graduation, I went through a difficult time in my personal life and I moved to New York. And there too, I didn’t start from scratch. It was my second home, I had been going there since I was a child, so I had many friends and contacts. I had the opportunity to access environments which would have been much more difficult to enter if I hadn’t had certain connections. Starting from there, I think I managed to structure a discourse on photography and fashion photography with a strong focus on social issues.

Definitely the experience. I still have a lot of humility, I think it’s fundamental. There is still a lot to do and learn. I am happy when I discover something new, when someone makes me change my mind about something. I always need a challenge, I tend to get bored otherwise. Curiosity, the interest in knowledge and others, in beauty, art and aesthetics is what has always guided me.

Under your artistic direction, Photo Vogue Festival has offered many opportunities to meet and debate about current issues affecting our societies over the years: the power of the female gaze in the artistic field (2016); the political significance of fashion images (2017); the enhancement of diversity and inclusion for a deeper understanding of our contemporaneity (2018); the deconstruction of stereotypes (2019). This year’s edition is titled “All In This Together” and the concept of community is at its center. What does ‘community’ mean to you?

I think some aspects of the huge tragedy we are still going through have been very touching. I am referring to the various forms of global solidarity and empathy that all of us have witnessed. If you compare it with the international political situation—the rise and the violence of people like Trump, or Salvini in Italy—if you think about 2020’s society, I didn’t expect to see so many acts of solidarity carried out also by private citizens.

I believe that two huge problems of Western societies are ego and narcissism. Social media has many positive sides, but also negative ones and we see self-interest every day. Everyone is the center of their world. If we were to detach from ourselves and try to see the other, I think we would be better off. The momentum of solidarity, of helping each other—which I saw not only in Milan, but all over the world affected by Covid— made me hope that we were distancing ourselves a little from the narcissist society. It is something that I welcomed with great joy and that I put at the center of the next Photo Vogue.

In a 2017 interview on Artribune, you said: “It is true that Vogue Italia, like every other publication, is completely integrated into the capitalist system, but within it, there is also protest.” In your opinion, what are the forms of protest that still have to break through, that must find more space at Vogue Italia?

Any form of protest in contemporary society is inscribed in the capitalist system. Unless you make a revolution, go out into the street and overthrow the capitalist system, everything fits into this system. There are those who have offered us alternatives, but it seems very difficult to get out of it.

I think and believe that everything we can do to improve one’s life must be done in our own way. In my case, I can do it through representation, because it is the tool I have, as well as helping artists to grow. With the magazine, with the digital world and also with my personal time.

Of course, there are many forms of protest that can find more space. In my opinion we are going in the right direction, but much more can be done, such as having narrative voices that are as different as possible. And I am not referring only to the photographers, but to all the figures who collaborate with the magazine.

Yes, also to give more exposure to the citizenship issue which affects more than 857,729 minors born (and/or raised) in Italy by foreign citizens who have settled here, but who are not recognised as Italians: Italians Without Citizenship. We talked about it on Instagram Live, a few weeks after George Floyd’s death.

Absolutely. And I want to go on with the racism discourse in Italy, which is a big problem; just as it is a problem not to deal with our colonial past. I want to continue making these tools, these spaces available to people who know more than me. For example, this year at Photo Vogue we will have a talk on racism and colonialism. I am working on several talks that will address political issues, you will soon know more.

As a photography expert and lover, are there any shots that have changed your perception, the way you see things, that have somehow upset you?

Yes. Part of my family is Jewish, and when I was little, very little, I remember this photographic exhibition they took me to see on the Night of Crystals. I was shocked by those images, and your gaze changes. The images of Abu Ghraib shocked me too. Another image that destroyed me is that of the falling man [the 9/11 attacks].

Then there are works and encounters that help you change your perception of things. I remember when I met my friend Patricia Lay-Dorsey. A wonderful woman, she has multiple sclerosis. I met her at the New York Times through a mutual friend, James Estrin. She showed me this fantastic book called Falling Into Place. It is a very beautiful, delicate project on her form of disability, on living with multiple sclerosis. It’s not pietistic, nor is heroic, which is the approach I believe in too. And thinking about her, about people with disabilities, like another friend, the Italian parliamentarian Lisa Noja, made me think a lot about the subject and gave me a lot of strength in trying to bring this discourse into fashion photography. Maybe that’s one of the things I’m most proud of, that something I helped start has real repercussions on people’s lives today. For example, you have Aaron Philip doing the Moschino campaign, or the project we did with Gucci Beauty shot by David PD Hyde, a photographer with disabilities. The protagonist is Ellie Goldstein, who has down syndrome. These are events that we could define as game changers for the representation of people with disabilities.

There is a overproduction of images today. Do you feel the same love for photography compared to when you started, when social media didn’t exist?

Absolutely yes, and I often have discussions with friends who tell me that photography is dead. This is bullshit I don’t want to hear anymore. In my opinion, photography is always alive, images work with emotions. I always get excited about images, I don’t think I’ll ever get tired of them. Each time it’s a new thing. Of course, I’m disappointed that today, compared to years ago when there were more styles in photography, there tends to be only one style: the documentary approach. I believe that in recent years the dimension of the dream, of irreality has been somewhat lost. It’s nice to dream, it’s nice to get out of reality. Think Tim Walker, David LaChapelle … I miss that a little.

And how much importance do you give to your image?

If you see my social networks, I’m not someone who posts photos of myself every two seconds. I wish it was my work that spoke, rather than my physicality. I care a lot about my image in an ethical sense, I hope to be perceived for what I am, for what really moves me.