Aïcha Snoussi | On Deconstructing Eroticism And Sexuality Through Art 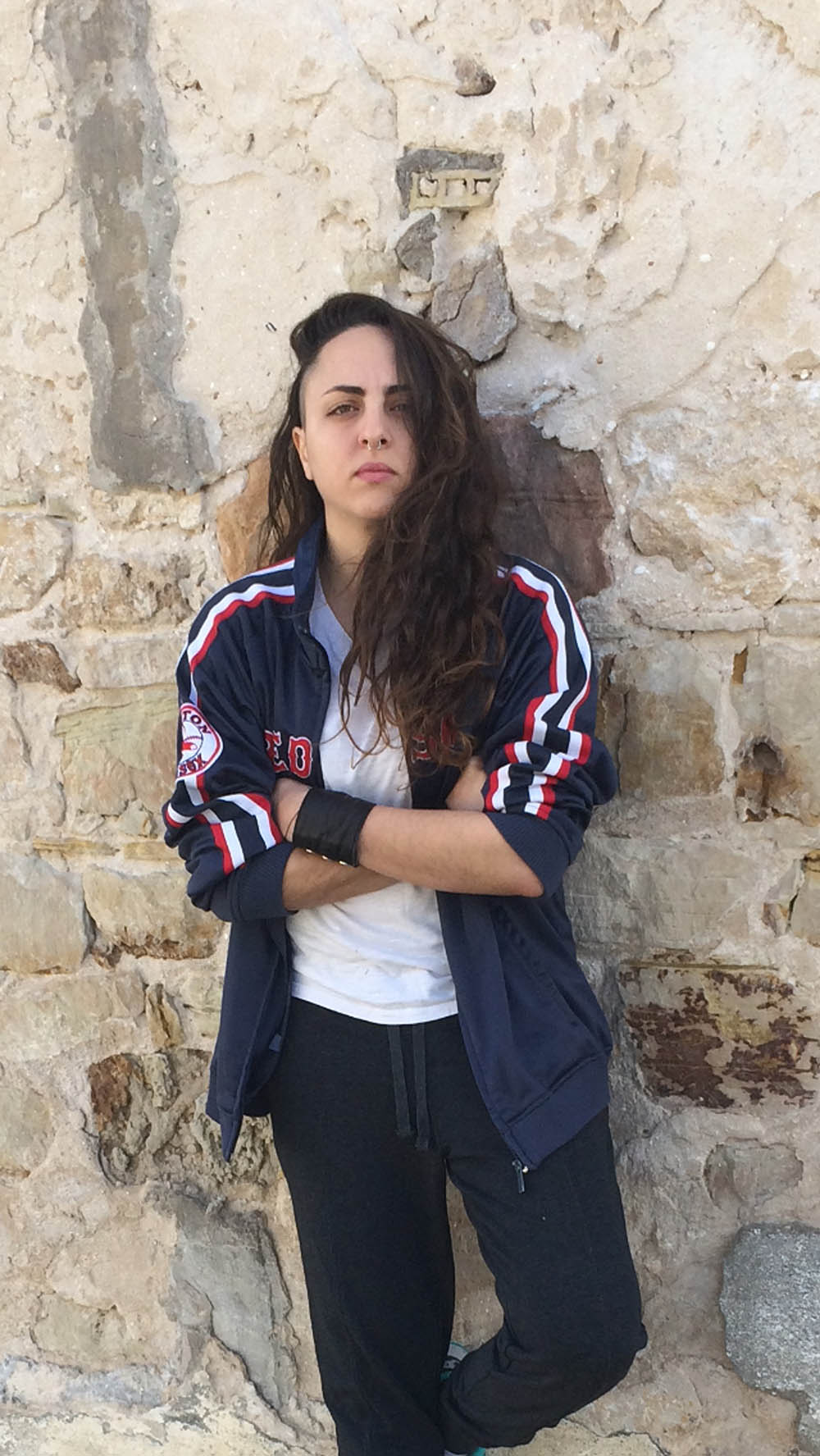 Art fairs are like theme parks for art lovers. You bounce from one attraction the next, gazing in awe, queuing, greeting, queuing to greet, filling your pockets with business cards, taking pictures and when it all ends, you just don’t want to leave. Last year at 1:54 Contemporary African Art Fair in London, we really didn’t want to leave because as we were about to get kicked out of Somerset House, we bumped into the amazing work of Tunisian artist, Aïcha Snoussi.

Engraver by training, her fascinating—and somehow disturbing—series of sketchbooks are the medium of a philosophical quest which artistically deeps into eroticism, sexuality, martyrdom, sadomasochism and more.

Beside participating to 1:54 London and AKAA in Paris last year, her recent exhibitions include Au Temps Du 230, Tunis (2017), Art Paris Art Fair at Grand Palais (2017) and Tunisia, The New Picture at the Tunisian Embassy in London (2016), so we had to get in touch and find out more about the inspiration behind her impressive work.

Graduate of the Institut Supérieur des Beaux-Arts in Tunis, Aïcha started drawing during childhood and by the age of twelve she knew she wanted to go art school to meet artists and find out what art really was. Since a very young age Snoussi was also very eager to draw on walls.

Unsurprisingly, today she is widely recognised for her large-scale, site-specific graphic ink murals which she draws directly onto galleries and museums’ walls: “My mother used to tell me ‘Not on the walls!’ because I was always drawing everywhere. The work that I do now on walls, my frescos, really comes from that, not just from paper. When I draw on walls it’s like if something is growing and spreading everywhere” she told us.

As a young girl, alongside her great passion for drawing, Aïcha was also into collecting things: rocks, shells, bottles. She used to meticulously conserve them, study and experiment with them, to then turn them into something new. And still today she goes through phases of searching what to draw on (paper or other tools), it all begins with discovering something – she explained – and that’s also how the sketchbooks came about: “I was just walking down the street in Tunis and I bumped into this old bookshop selling old paper, notebooks and other stationary material by kilo. I had a huge crush and I took all of it. I didn’t know what I wanted do with it, but I just took it and for a whole year I did nothing with it. I sporadically wrote or drew something on it, but it was only after a year of experimenting that the idea of creating an encyclopedia came about.”

As one digs deeper into the sketchbooks, it’s easy to understand that they’re much more than just drawings: “I like the idea of being an archaeologist, finding something and trying to make something with it. This concept is not just about what you find on the street, but also inside yourself” the artist revealed. “During the years of my artistic training at art school I also began to discover myself and my sexuality. My life style and my ideas were developed by culture and tradition, but when I understood that it wasn’t really me, I also started to archaeologically look inside myself. I found out a lot of things, especially when it comes to sexual fluidity and eroticism, pleasure, pain and all of that stuff. After years of wondering ‘maybe I’m like this or like that’ and having a lot of different experiences, it takes a very long time to make sense of what goes on in your mind.”

For this reason, Aïcha lacerates paper like skin on the human body, opening it, using ink on it, slitting and cutting it, in order to metaphorically deconstruct ideas connected to desire, eroticism, sadomasochism, bondage and all the things that one could do to pleasure the body. “It’s kind of erotic for me and that’s exactly what they don’t teach you at school or in society, they never teach you how to use your body. For example, I do everything with my hands, when I work, but also when I have sex. They are very important to me because for me it’s all about the tactile experience, about fluid, organic things.”

Among Aïcha’s many and various sources of inspirations, the intellectual Georges Bataille and the painter Hieronymus Bosch stand out. The latter is Aïcha’s oldest crush and favourite painter, because in his work there’s no distinction between species, everything—down to the minuscule details—is a part of the big picture.

Today, Aïcha finds this idea in the work of feminist thinker and biologist, Donna Haraway, author of Cyborg Manifesto – Snoussi explained. “I like the idea to abolish all distinctions between women and men, animals and humans, nature and culture. There’s no hierarchy, but a kind of network in which everything is connected. Donna Haraway uses the figure of the cyborg, an element also present in my work. In her point of view, we are already cyborgs, it’s not a future event and it’s happening now because we take medicines, we do a lot of things that are not natural.”

Aïcha loves visual art, but she’s also into feminist theorists, films and much more. The last film she really got into is The Blind Beast by Yasuzo Masumura, a dark erotic love story set in Japan involving a blind sculptor who develops crazy sexual relationships with his models. She also gets a lot of inspiration from the interactions with viewers and passers-by at exhibitions: “People are out there for different reasons. Some just want to watch or buy, but there are people who are really interested in your work and try to understand you as an artist. I had very interesting conversations at my shows, it was really touching. Some people came to see my work and told me things about myself that I didn’t expect anyone to understand: a girl in London understood that I was talking about sexuality by the work I did on paper and she also got the cyborg idea—and I hadn’t written about it anywhere!” she confessed.

“Sometimes having to explain my work is very difficult, so it’s the most amazing thing when someone understands you through your artwork. I think a lot after exhibitions, I doubt myself, I’m never sure and by having discussions with people I learn a lot about myself. It’s a work in progress, the exhibition is not the end, it’s just a moment in the life of the artwork.”

As a Tunisian artist based in Paris, Snoussi elaborates and decostructs the complexity of self-discovery through her pieces, dismantling the objections to the many dilemmas she confronted throughout her upbringing. And if for some North-African artists the Arab Spring acted as a strong catalyst for change and as an artistic awakening, there hasn’t been such influence on the artistic output in Aïcha’s case. “The revolution was a very special moment, because we felt something huge, we felt all connected and we had no clue of what was gonna come after, but I really can’t connect it to my work because I started my own revolution as I was growing up by saying no to my father, for example. When I was young I’ve always wondered why there were rules for girls and not for guys. In Tunisia the street is a place for men, bars are for men only, you can’t smoke in the street without everyone staring at you. Well, I go out late at night and I smoke in the streets and I go to bars and lots of girls do that too. My family is not very religious, but there was a lot of stuff that was being decided for me. In Tunisia you start a revolution when you talk about sex or gender, because you can’t live your sexuality freely, you can go to jail for three years, it’s insane, so we have a lot of work to do.”

Aïcha’s next exhibition will be on 19-22 April at the 50th edition of Art Brussels in Belgium, but she doesn’t know what the future holds for her, as she’s decided to end the sketchbooks’ period after working on them for more than two years and try something new.

“I went back to Tunis last month and I came across a lot of stuff that I had collected or I hadn’t finished and it was amazing to find all my old stuff. I really miss this part of me, when I was young it wasn’t about art, it was just who I was, I just liked to collect things and try to create things, but then I went to school and I started developing my work. Now I want to take some time off drawing, go back to collecting and try to connect with my younger self again. I have many small projects going on, I want to study and find out more about gender and sexuality, but I don’t really have a clear idea, it’s a moment of reflection and experimentation.”