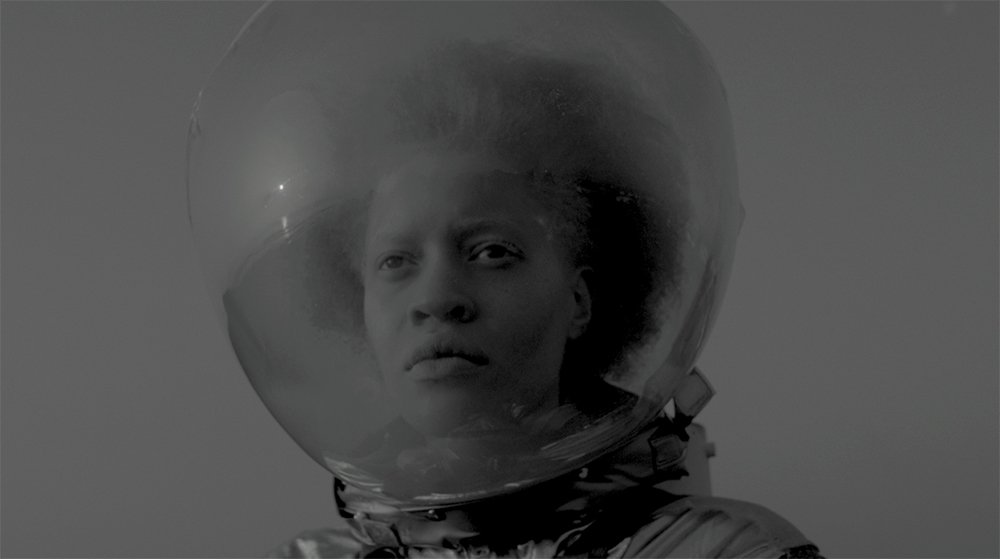 In Afronauts (2014), a short film by Ghanaian filmmaker Nuotama Frances Bodomo, 17-year-old Matha has been chosen to be Zambia’s first person to be sent to the moon. Through rigorous training within the ‘Zambia Space Program’, the Afronauts are preparing to beat the U.S. and the Soviet Union to reach outer space. Matha (Diandra Forrest) deals with the expectations and responsibility placed upon her while her aunt fears she will simply be blown up. Though essentially about the space race, Afronauts is set in 1960s Zambia and is a work of speculative fiction.

According to the successfully concluded Kickstarter for the feature-length version of Afronauts currently in development, Bodomo and her team were “interested in following characters that have not been able to find a home on earth and are therefore most attracted to the promise of the space race. We are interested in talking about lack of access to science, and different definitions of technological advancement.” In a 2019 interview, Bodomo asserts that “the question of whether Matha would make it to [space] is almost irrelevant.” They are more interested in “exploring modern-day myths: the iconic place of the Apollo 11 touchdown in our collective consciousness, and the importance of myth in an enlightened age of scientific exploration.”

The actual story of the 1960s ‘Zambia Space Program’ is stranger than fiction. The real Matha Mwamba was enlisted by Edward Mukuka Nkoloso, a school teacher and the self-appointed director of the ‘National Academy of Science, Space Research and Philosophy’ which had no affiliations with the Zambian government. An article in Time Magazine from October 1964 stated that “Nkoloso [was] training twelve Zambian astronauts, including a curvaceous 16-year-old girl, by spinning them around a tree in an oil drum and teaching them to walk on their hands”. In footage of a training session available on youtube, the British reporter, visibly amused, implies that Nkoloso and the Afronauts are “a bunch of crackpots”. However, several hints point to the fact that the program was a cover for political mobilization. Namwali Serpell—a Zambian writer and academic who encountered Nkoloso’s story in Bodomo`s film— did some research whose results are in a fascinating long-read for The New Yorker Magazine (2017). “Perhaps the question is not whether the Zambian Space Program was satirical but why so few have imagined that it could be,” she writes. In a 1964 Op-ed by Nkoloso that Serpell found, space appears as a metaphor with which he criticizes British colonialism: “We have been studying the planet through telescopes at our headquarters and are now certain Mars is populated by primitive natives” Nkoloso wrote. “Our rocket crew is ready. Specially trained spacegirl Matha Mwamba, two cats (also specially trained) and a missionary will be launched in our first rocket. But I have warned the missionary he must not force Christianity on the people if they do not want it.”

As Nkoloso’s son told Serpell, his father was a well educated, World War 2 veteran and a key figure in anticolonial resistance in Zambia. For instance, to avoid detection during a sweep for agitators in Zambia’s Copper Belt around 1948, Nkoloso —alongside other unionists— would disguise himself as a woman. After being sent back to the rural Luwingu village to quell his activism, he reportedly used this same strategy for comic relief, approaching colonial officials to ask about this notorious Nkoloso fellow, to everyone’s amusement. It was in Luwingu that he co-organized a large-scale civil-disobedience campaign against the British colonialists in 1957.

One of Nkoloso’s contemporaries suggested to Serpell that – subsequent to his arrest and torture in Luwingu- he had lost it. He did a short stint as President Kaunda’s “Special Representative” at the African Liberation Center, a safe house and a propaganda machine for African anti-colonial movements. But he was eventually sidelined from government and went back to law school in his sixties, graduating in 1983. Nevertheless, he was working as a chief security officer for a company outside Lusaka in one of his last interviews before his death in 1989 in which he was keen to use his airtime to speak about his “scientific madness” for space travel.

While there is nothing to be gained by idealizing the ‘Zambia Space Programme’, much is lost if Nkoloso’s enduring legacy is trivialized. Within the last decade, a new generation is finding inspiration in his belief that there is power in the ability to imagine the impossible. Prior to Bodomo’s 2014 film and Serpell’s novel Old Drift (2019), Christina de Middel’s photo book (2012) and film trailer—with Pep Bonnet—(2013) both titled The Afronauts were inspired by Nkoloso’s Afronauts. While the research quality and degree of fictionalization vary, such projects remain the only archives in which this history is recorded.