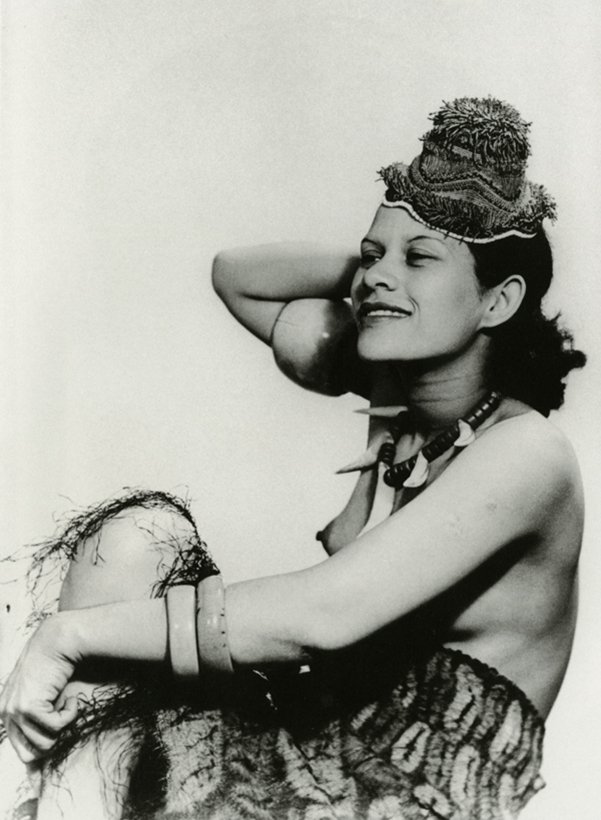 It happens all the time. A beautiful young woman decides she wants to become a model and asks a photographer friend to take some head shots. Eighty years ago this ordinary series of events took an unlikely turn. That was because the beautiful woman was black; the photographer was her lover Man Ray; and one of the photographs landed in the September 1937 issue of Harper’s Bazaar, making her the first black model to appear in a major fashion magazine.

The story begins in Paris around 1936, when a young dancer from Guadeloupe named Adrienne Fidelin met Man Ray. He was 46 and, judging from pictures of her at the time, she was in her mid-20s. An enchanting, high-spirited beauty, Fidelin — who was known as Ady — became Man Ray’s lover, model and muse.

The exact circumstances of their meeting, as with many details of her life, remain elusive. What is known is that she was dancing with a French company with ties to Guadeloupe and that the two were inseparable. Fidelin met Man Ray at the height of the Surrealist movement and was quickly embraced by his close-knit circle of artist and writer friends.

She met, socialized and vacationed with Pablo Picasso and Dora Maar, Paul Éluard and his wife Nusch, Max Ernst and Leonora Carrington, and Lee Miller and Roland Penrose. In his autobiography, Man Ray describes how the group welcomed her, which is confirmed by dozens of snapshots and arty portraits of Fidelin looking at home in the company of her hedonistic and frenetically creative new friends.

It’s not clear when Fidelin began to nurture modeling aspirations.But judging from the comfort she displayed in front of Man Ray’s camera and her willingness to play whatever role he asked, by 1937 she was ready for the glossies.

During those years, Man Ray was making his living as a photographer for a number of American magazines and was one of Bazaar’s principal photographers. Bazaar’s publisher, William Randolph Hearst, prohibited photographs of blacks in the magazine — a not-uncommon stance at the time. The magazine’s feisty editor, Carmel Snow, took pleasure in challenging Hearst on the race issue. (That year, Snow commissioned photographs of the opera singer Marian Anderson.) It is hard to know what role if any Snow played in Fidelin’s case, yet somehow her picture got in.

As the Man Ray scholar Wendy Grossman relates, the photographs were inspired by an exhibition of headdresses from the Belgian Congo that Man Ray had seen at the Galerie Charles Ratton in Paris earlier that spring. Four photographs were selected for the two-page spread, headlined “The Bushongo of Africa Sends His Hats to Paris.” On the left were three images of white women, alongside text by Paul Éluard; Fidelin’s photograph filled the entire right page.

Although the pictures were all head shots, it’s hard not to notice how Fidelin looms large, sequestered on the opposite page. Grossman points out that Fidelin “wears not the Western garb of the other models but is decked out in African jewelry with her bare skin exposed. These cultural markers of her otherness lend an exotic and sexualized air to the image underscored by the classic come-hither pose of her arm crooked behind her head.”

The fact that she was fetishized as “other,” in addition to her relationship to Man Ray, undoubtedly played a role in her breaking the color barrier. Perhaps less obvious are the role that Fidelin’s light complexion played and the fact that she may not have been seen by the editors as really being black. She was from the Caribbean, after all, and spoke French; that is, she was not black American. Nevertheless, Fidelin was not to appear again in a fashion magazine.

Fidelin and Man Ray parted ways in 1940, when he fled France for the States during the Nazi occupation while she chose to remain in Paris to care for her family. She later married, and the last thing on record is that she was dancing at a “Negro” club on the Champs-Élysée.

It was not until the postwar years that black models appeared with any frequency in fashion magazines. Even then, they appeared almost exclusively in black publications like Ebony, which was founded in 1945. The American fashion industry was particularly reluctant to use black models. Early successes like Dorthea Towles Church had to flee to Paris to get work. Vogue did not put a black model — Beverly Johnson — on its cover until 1974. And Naomi Sims, considered the first black supermodel, didn’t even start modeling until 1967.

This story originally appeared in T: The New York Times Style Magazine on February 25, 2007, with the title “Yo, Adrienne.” In accordance with the author of the text we agreed to share it on GRIOT. Two weeks ago Sala Patterson traveled to Guadeloupe where she appeared on Canal 10 television discussing the cultural biography that she and art historian Wendy Grossman are writing about this “missing muse” of Man Ray’s and their interrupted love story. Curious to know more? Drop Sala Patterson a line.