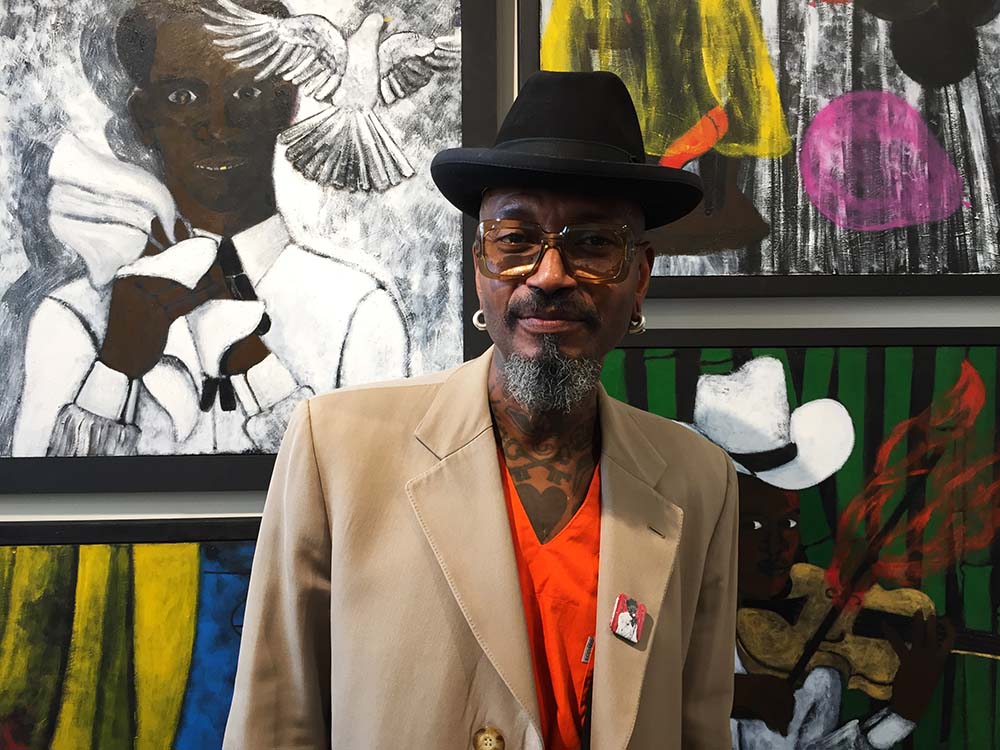 “An articulate contemporary dialogue between epochs, cultures and individuals.” This is how the contemporary african art fair 1:54 introduces the work of Nigerian-born, London and Salvador Bahia-based painter and architect Abe Odedina.

Odedina’s art is a mythical interpretation of humanity and the world in which it flourishes and prospers. In his works, acrylic paint on plywood becomes a figurative mean of expression that brings the gods to life, defies the rules of gravity, embraces universal concepts and actualizes Abe’s creative colourful hyperuranion in which all unifies around the human figure: “What you can tell from my paintings is that the human figure is central to my expression, the humans that I paint are not drawn from nature, they are constructions made in order to explore ideas around our common humanity”.

But as philosophical as it might sound, Odedina is a total character, as we realised when we had the great opportunity to interview him at 1:54 last month. Slender-bodied, completely covered in tattoos and incredibly stylish, the architect and self taught painter is a living work of art himself, even though he reckons there’s a huge difference between the way the scripts on his body speak and the way he creates and interprets his art. “Painting individuals from models or friends would be too specific, what I want is to tell all our stories. The art of storytelling through painting is completely different to writing. It has a particular discipline and I embrace that, I try to find a climactic moment in the narrative that reaches as far into the past as I can manage but also reaches out to the future,” he explains. “It’s a continuum, I’m interested in the continuity because I like to think that I come from a long line of African makers. I’m honoured to be in that tradition across the continent. We have made the most extraordinary work historically and this is because there’s a wonderful relationship between form and complex ideas, which has to do with the rituals around which the works have been made.” After a successful career as an architect, Odedina’s professional path was unsettled by a trip to Brazil, his “St Paul’s conversion”, which made him transform a hobby into his profession and vice versa. The mystical folklore of Bahia and Pernambuco, the Voodoo arts of Haiti and the Painters of the Sacred Heart influenced and shaped his artistic and personal metamorphosys.

“She’s the Tempest” he says as he leads the way to the stunning painting “a goddess well-known in Yoruba land. She’s the reason behind changes in life, strong passions. She comes into our life when everything is thrown up in the air and we think the end has come and it may have come, but she is also about regeneration because ones the decks are cleared, you then a have a choice to either lie on the floor or get up and change. And you may not realise it at that time, but it’s about renewal and transformation, she is involved in all aspects of our life from the unborn to the transitioning in the other world. And I always celebrate the goddess, creative veneration is an important part of my practice, the gods need us, we have to celebrate them. If you don’t, you get nothing.

Why is it important? Because they are our philosophies, they are ingrained in our conception of the world and we’re impoverished for not understanding that significance. They are part of humanity, a sustainable system of thought, of thinking that we should incorporate with all the other things we have in contemporary life. There’s nothing to go back to, but we can take them as we go forward. That’s my theory.”

As soon as we entered the space there were other pieces that immediately caught our attention, such as the many painted wooden boxes lying around: “I made these commemorative boxes to celebrate organisations that I think we should know about. This is called ‘Agbekoya Society of Farmers against Suffering‘.

This one Life Abundance League, they were farmers and they were very interested in looking after the cocoa farmers and their interests. The patriot saint of farmers is Òrìṣà Oko, it is often represented by a phallus which is a symbol of life force and fertility that we should all harness and be aware of. And there’s also a part of me that is trying to detoxify male sexuality, it’s important to detoxify it, we must not conflate terrible things with everything, that’s the tendency, it’s convenient and “end of story” for some people. I’m not very good at following those sort of notions.”

For Abe Odedina it was a great honour and a privilege to be given the opportunity to have a solo show at one of the most influential African art fairs around. However, he comfortably points out the limitations of the extent to which art, more specifically African art, is perceived: “What I would like to do is start a conversation so we can talk. One of the most interesting things is the gap between MY intention and YOUR interpretation, then we can have a conversation and the world comes alive. I try to own this, I’m not afraid of it, I welcome that dialogue because you can feedback its power and then make something, it’s like from the oral tradition call and response. So I call myself an African artist not because it has one look, but because of the dynamics I hope to set into motion and so I’m very proud to be trying and I hope to achieve it every so often, that’s what I do and that’s the struggle.”

In 2019 Odedina will showcase his works in a solo show at Underground Museum in LA. Furthermore, he was chosen as one of the three painters whose work will be animated for ‘The Children’s Monologues’, a theatrical performance by the charity Dramatic Need, directed by Danny Boyle and based on the words of children growing up in rural and remote African townships. This unique event will happen simultaneously for one night only at at Carnegie Hall (NYC) and at Johannesburg’s Market Theatre (SA) on November 13, you can find more info here.

All images | Photos by Johanne Affricot