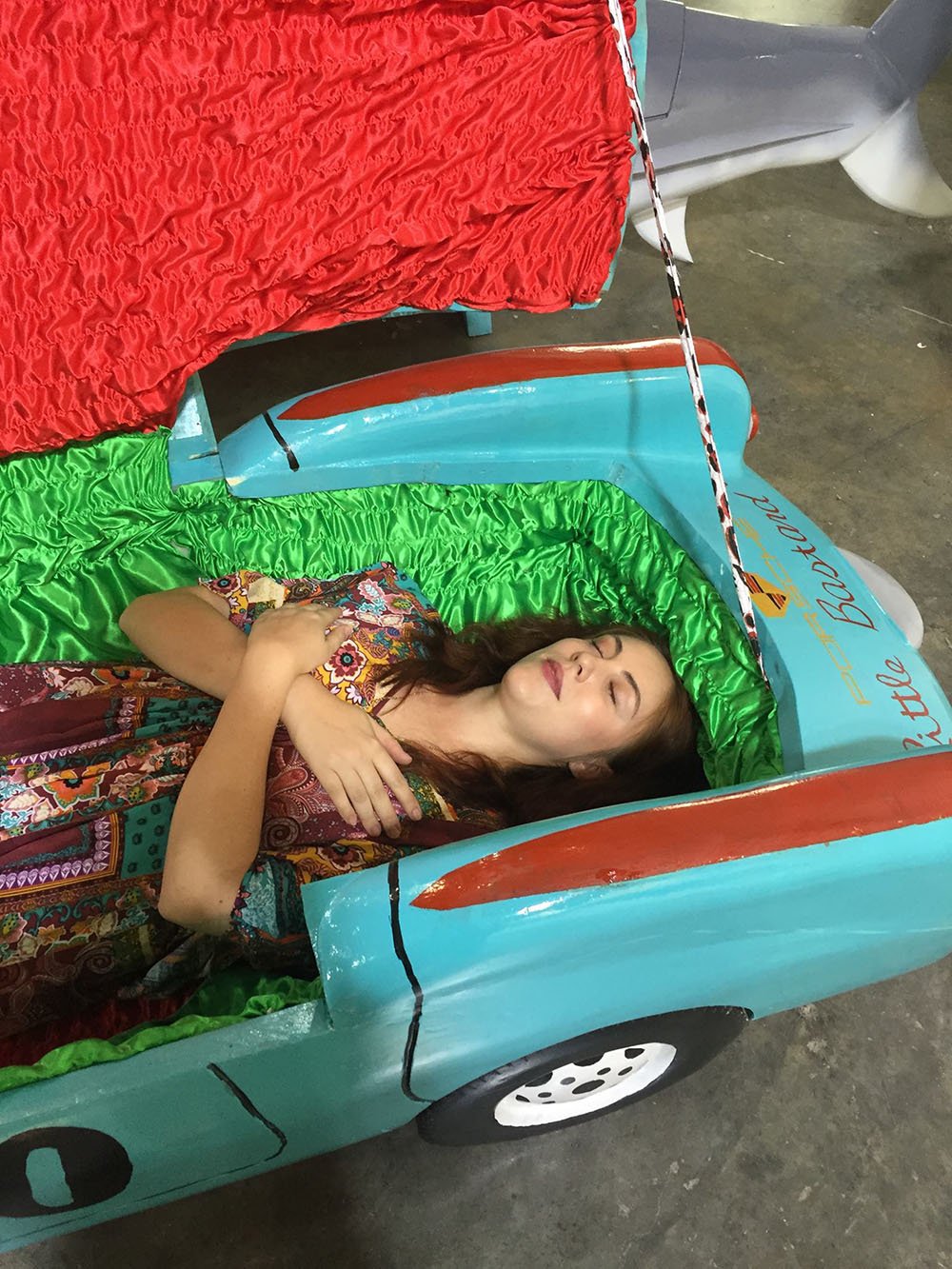 Last October I attended the London edition of 1:54 African Art Fair. One of the most interesting artwork that caught my interest was a coffin-shaped Walkman made by Paa Joe. You should know that in Ghana funerals not only represent an occasion to gather and mourn the late loved one but they are also an opportunity to celebrate life after death, a social event involving many people – the more people there are, the more popular and esteemed the person was within the community.

There are some families who spend as much money on a funeral as you would on wedding, sometimes even more, and the most iconic thing of this celebration is the casket. Not only because of its shape, but especially for the making of it, which involve a huge amount of creativity, craftsmanship and empathy.

I talked about all these processes with famous Ghanaian coffin-maker, carver and artist Paa Joe, who has been producing fantasy coffins for more than 50 years, and what I got is a deeper view and understanding of his art which is a part of a new tradition: “I was born in 1947 in Accra [Ghana]. When I was fifteen, my mother sent me to my uncle [Kane Kwei, his mentor and for many, accredited to be the inventor of the craft] who was part of the pioneers of these coffin makers, to learn their tricks. That was in 1962. I spent 10 years with him and in 1976 I was able to open my workshop where I began a master on my own” he told me.

“From there, many collectors and art lovers have approached me, and they bought a lot of my pieces. Since then, it has been showed in most parts of the world, from France to Italy, to Japan, Korea, Germany, England, United States and some African countries.”

GRIOT: Was it your intention to become an artist when you started the internship with your uncle or did the vocation come after?

Paa Joe: Yes, I wanted to become a great artist, not only a coffin maker, because I realized I was gifted even before I started with him [his uncle]. In Ghana people are being buried in fantasy coffins [abebuu adekai, in the language of the Ga ethnic group means “proverbial coffins,” coffins that tell a story] that symbolize their career, what they were addicted to or things they love the most. I wanted to be able to join this trade, to send the dead to the land of the afterlife well and colourful.

Why did you choose coffins as the way of expressing your art? Did it choose you or was it in your life plans?

At the age of sixteen, you have no choice. I didn’t have any background in any type of art. I was just doing my apprenticeship. My perception of this changed when I turned 20 years old. At that age we grow and learn more, so I became more interested in what I was doing, also by realizing people’s ideas. I got better and more creative in my work. It all came along by practicing and training beside my uncle, then I decided to turn this craft into art.

Could you tell us the importance of these types of coffins in Ghana? Is it linked to the Ghanaians’ religious beliefs of life after death?

Coffin is a symbolism. In Ghana people believe in the afterlife. Death is not the end, it’s a continuum of life. For instance, if you were a driver or a car lover when alive, you will be buried in a car-shaped coffin, assuming you will keep driving in the land of the afterlife. If you were a teacher, it would be a book or a pen so you’ll continue to teach. Same for a journalist, it might be a microphone or camera. That’s how it goes. Is it a tradition in Ghana to be buried that way or only privileged people are given the right to this kind of funeral?

Everyone can be buried in these coffins. It’s not a tradition reserved for only a few chosen people. Usually traditional people are buried in a casket in the shape of a Lion, Eagle or Stool coffin, while religious people would be interred in a bible-shaped or church-shaped coffin. This might be the only real exception.

It’s a common tradition that dates back to the 50’s, even in the villages [It is said that Kane Kwei’s uncle, a fisherman from Ghana, feeling that he was dying, he asked his nephew to make him a boat-shaped coffin.] Before that, the dead used to be carried in palanquins.

Do people choose their coffins before their death or is it the family who decides the way they will travel to the afterlife?

It’s very rare that people order their casket before, but it happens sometimes, about 5% of cases, otherwise it’s the family who makes the decision. They come to consult us. After we have been told how that person has lived, we decide together which casket is the most appropriate for that person. By the way, it’s the same process with the art collectors. They tell me what they want and I realize their fantasy casket.

With all the international attention you get, does it distract your primary focus on making coffins? Do you think it is the western view that transformed your work into art?

My main worldwide exposure started with the exhibition “Les magiciens de la terre” in 1989 at Centre Pompidou in Paris, where my uncle Kane Kwei and I were showing seven coffins we made. But also before that, names like gallerist André Magnin and the photographer duo Carol Beckwith and Angela Fisher already approached me to collaborate. Besides the people who were traveling to sightsee the country and discovered my workshop by chance.

People have been buried in this particular way in Ghana for many years, so even if my craft is recognized and applauded internationally as a form of art, in Ghana it’s not perceived that way, also because many people don’t really have an idea of what “artwork” and “creativity” are, so they don’t see me as an artist but as a coffin-maker. I’m still making coffins as much for funerals in Ghana as I do for the art market. I swore to myself a long-time ago that I will always be faithful to the local community. They’ve been buying caskets from my studio from the beginning, much earlier than any art collectors or art dealers, so why must I reject my first supporters, the people who made me famous? What if I don’t have any order from the international market for a while and then one comes from the community? Should I reject it? How would I survive? No, no. I must be faithful to them, no matter what.

Thus, I’ll use soft wood and common materials to make the coffins for a local funeral, caskets that go to the grave, whereas I will use hard wood and higher quality components which are very expensive, for art collectors and art dealers. Both are always handcrafted. I don’t use machinery. In one of our first articles [Italian version], we talked about the Afro-Caribbean funeral in London, how they celebrate death as part of life. Could you tell us how it goes in Ghana? What is your personal relationship with death?

Like I said before, Ghanaian people belive in life after death, and like most countries in Africa, funerals and mourning can be very long. A funeral can take up to three or four weeks, so it also allows me time to realize a special coffin for the deceased. Once the coffin is ready, the family goes to the mortuary, usually on Thursday or Friday, to pick up the late one’s body. Most funerals are held on the weekends, most frequently on Fridays or Saturdays. The body is buried and the celebration extends over the whole weekend. Mourners, usually dressed in black or black and red traditional funeral clothing, may travel to other towns or villages, and in turn the bereaved families always provide food, drinks, music and dance.

My personal take of death is not very simple. When you’re a coffin-maker you often have death on your mind, maybe not your own death but the person you’re making the casket for, so it can make me feel pity and sad sometimes [Paa Joe’s mother died in late 2012 and he made the coffin for her.] When the work is for an art space or a collector, we enjoy it differently. Contrary to the superstitious belief, in Africa, the people in the Death industry don’t necessarily have something to do with mysticism, but honestly it’s only God who directs us, protects us and leads us.

Yesterday there was the world premiere of the documentary  “Paa Joe & the Lion” by filmmaker Benjamin Wigley and produced by Anna Griffin -ArtDocs, and you’re having a gala screening at Broadway Cinema in Nottingham on Sunday 31st August. Can you give a few words to present it to our readers?

Ben [Benjamin Wigley] discovered my artwork like you did, in London, but at Jack Bell Gallery in 2011. He was covering the exhibition and he became fascinated by the works, so he asked Jack Bell, and through him, contacted me to make a documentary about my artworks and I said yes. Long story cut short, he traveled several times from UK to Ghana to meet me, following me, my family, where I go to church, my business and my ups and downs and also the legacy I will be leaving to my son Jacob. The movie is about my past, my present and my future.

Because of the struggle and uncertainty that rule the life of an artist, especially in Africa, many prefer their descendants to follow a different path, more secure. You just mentioned your son Jacob. Have you advised them on their future?

Initially two of them were working with me, but one of them left and now works in another industry, that was the younger one. Jacob who assists me is the oldest. I would like to do an art residence in Europe with him actually. I’m encouraging him to follow my way and embrace this career, so when my time comes and I will be taken over, the name Paa Joe, my legacy, will remain forever.

To conclude, what advice would you give to someone to overcome the fear of death?