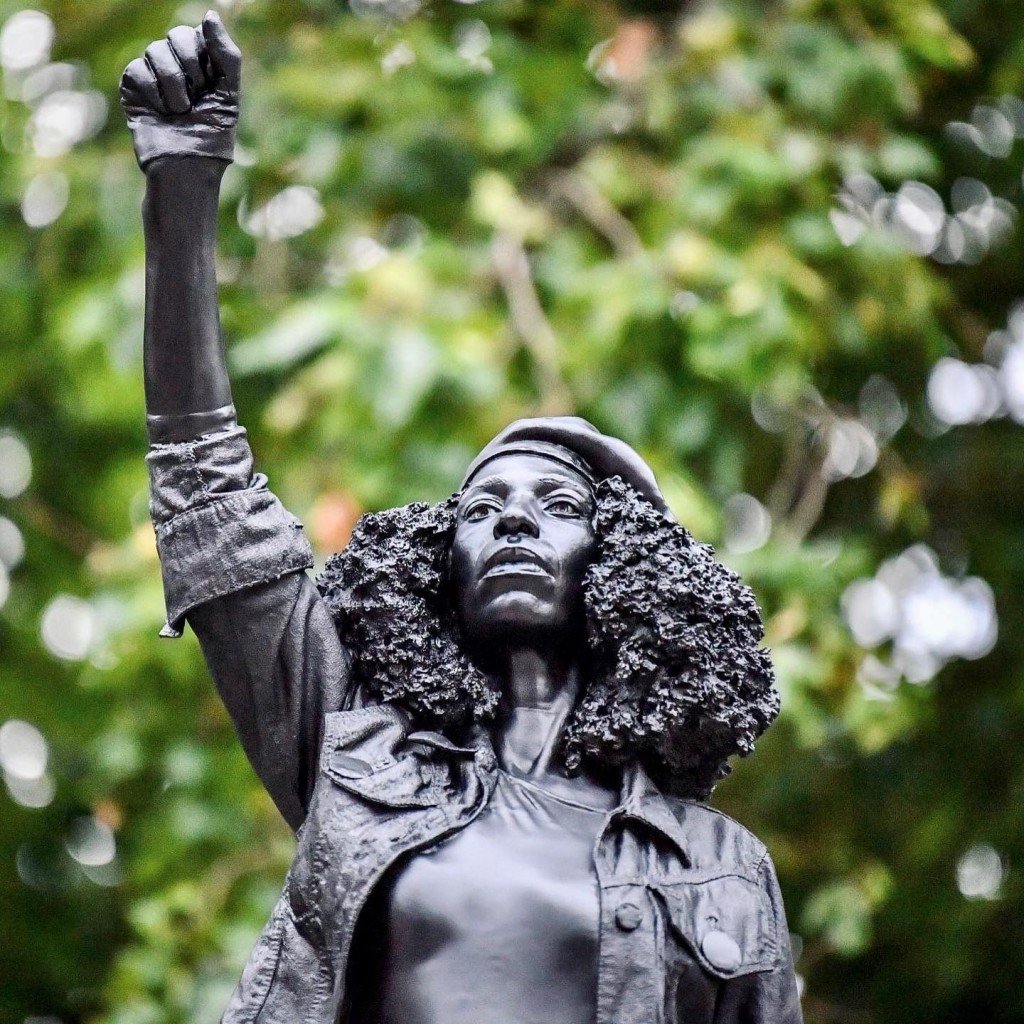 When Bristol-based stylist Jen Reid heard about a Black Lives Matter protest happening in her city on June 7, she wasn’t sure about going, as she takes care of aging parents and was concerned about the risk of contracting Covid-19. She didn’t even think for a minute that her act would lead to the erection of the Surge of Power statue, a temporary installation by London-based artist Marc Quinn. With the aim to push the conversation on racism in the UK, Quinn’s initiative was put in place without the acknowledgement of the Bristol City Council.

The arrival of the sculpture from London to the southwestern English city sounds like a scene from Mission Impossible. Devised and elaborated in great secrecy, it arrived early in the morning of Wednesday 15th July. Helped by a team of only ten people, Quinn erected his artwork shortly before 04:30 BTS on the same plinth where the statue of slave-trader Edward Colston used to stand. Present for the early unveiling, Jen Reid was then photographed with her fist clenched while standing in front of her black resin-and-steel doppelgänger. “When I was standing there on the plinth, and raised my arm in a Black Power salute, it was totally spontaneous,” she said.

Criticising the fact that the statue was put up without permission, Bristol’s Mayor, Marvin Rees, declared in a tweet that “anything put on the plinth outside of the process […] will have to be removed.” Fortunately, a few lucky passers-by got a chance to see and take pictures of Surge of Power before it was retrieved to be displayed in a museum along with the relics of the Black Lives Matter protest.

Unbolted by Bristolian demonstrators, the sculpture of the 17th-century slave-trader and Conservative Party MP was unceremoniously toppled, before being thrown into the water at Pero’s Bridge. Arriving a few minutes after the event, Reid, who was accompanied by her husband Alasdair Doggart, spontaneously climbed on the plinth and raised her fist with anger. Cheered by other protesters, her husband took advantage of the opportunity to caputre the moment.

Discovering the picture on social media, Quinn immediately got in touch with the young woman. “I saw pictures of Jen on the plinth and she spontaneously made this gesture and I thought ‘this is amazing’. She’s made an extraordinary artwork just by doing that and it needs to be crystallised into an object and put back on to the plinth.” Through Reid’s picture, the well-known plastic artist saw the opportunity for an act of guerrilla art which would help to “keep the journey towards racial justice and equality moving.”

With the aim to keep alive the memory of the recent events which have affected the US, and to refresh the debate on racism and discrimination in Europe, Quinn didn’t use bronze to build his statue because it would have taken months. Surge of Power was a lightning raid.

As for the Bristol’s mayor and council, soon after the overthrow of the Edward Colston’s statue, they hired a team of historians and experts commissioned to reflect on possible different ways to reconcile the city with its pro-slavery past. Some of them proposed to exchange Colston’s statue for a sculpture of the activist Paul Stephenson, the organiser of the boycott of a Bristol bus company in the 1960s. Bristol-born street artist Banksy also offered his services and suggested the creation of a memorial portraying the slave-trader in the act of being toppled by BLM demonstrators.

As for now, nothing has officially been decided yet. But one thing is certain, the battle of memory will remain at the heart of socio-cultural debates in the UK, as well as in the rest of Western Europe, at least until the implementation of new effective policies.