In Conversation With Enfant Précoce 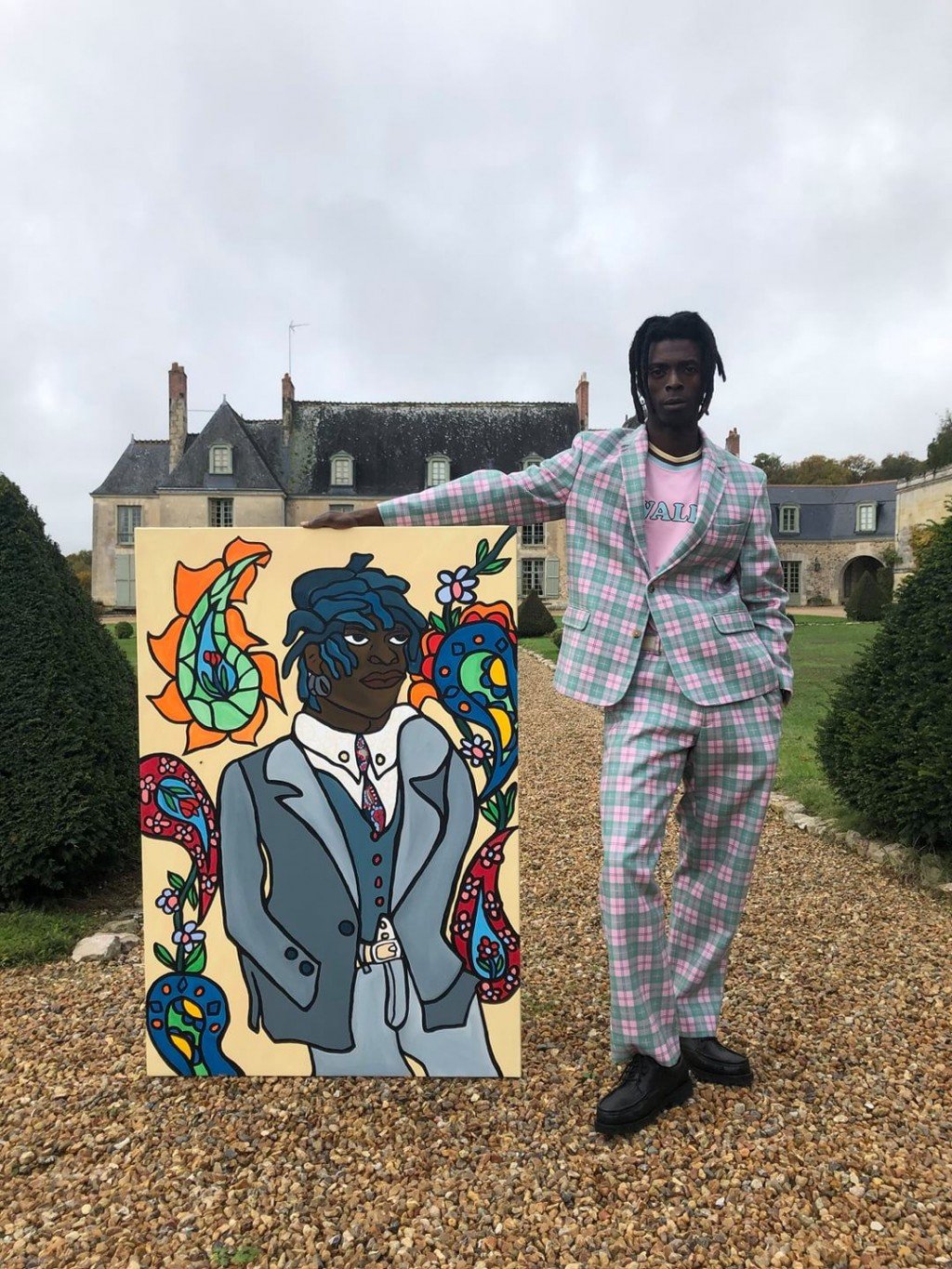 He was 24 years old when he started painting. His name is Francis Essoua Kalu, but people shall probably remember him as Enfant Précoce. He’s the nephew of the Cameroonian plastic artist Malam (Isaac Essoua Essoua) and has made a name for himself through social media by posting pictures of him sitting with his works in front of famous Parisian museums. Since then, he exhibited in galleries like Galerie Fauve Paris, La Mongolfière, Institut Français de la Mode, and Art Sens, and his works were showcased at Dak’Art in 2018.

Describing his paintings as a journey in the dreamlike world of childhood and memories, his work is colourful, sensual and sensitive. Brand ambassador for Walk in Paris, the Cameroonian autodidact is also a talented dancer, he told us.

GRIOT: Your name is Francis Essoua Kalu, but your pseudonym is “Enfant Précoce.” Why this choice of nickname?

ENFANT PRÉCOCE: I chose ‘Enfant précoce’ because of my childhood. As a child I skipped a year at school, but curiously enough, I was held back later on; ‘Enfant Précoce,’ because the style of my lines comes from children’s imaginary world and because—as I like to say—I draw like a kid. Finally, ‘Enfant Précoce’ because I’m an autodidact.

When did you start drawing?

I was very good at drawing when I was a child, especially in high school. I used to do my friends’ art homework and thanks to me they had good marks. Obviously, the teacher didn’t like it and, in order to give me a lesson, he used to give me bad marks. Well, perhaps they weren’t that bad, but they were certainly less than what I deserved. It was his way to make me understand that I was preventing my friends from learning and making progress.

Have you always dreamt of becoming a painter?

No. I originally wanted to become a dancer and because of that, I didn’t take painting too seriously until the age of 24. It’s only then that I started realising that I could do something with my paintings.

Do you still dance?

Yes! I actually joined a company called La Marche Bleu last year. It’s a company made of ten dancers from artistic backgrounds of all sorts (electro, contemporary, classical, hip-hop, experimental etc.). We were supposed to do our debut last April, but due to the Covid-19 outbreak it has been postponed. I hope that with the new measures we will soon be able to perform.

Does dance influence your creative process when you’re painting?

I don’t know if I can say that dancing directly influences my work, but when I paint I often put music on and dance, especially when I’m on to something. I get lost listening to African, Spanish or even Portuguese, classical or hip-hop melodies, I let the music run through me and inspire me.

It is widely said that you are a self-made autodidact who built his own style through imagination and childhood memories. You never studied art in an academic or conventional way and yet, your productions are extremely powerful and expressive. Have you ever been penalised for not having attended art school?

It’s always difficult to enter the art milieu when you are an autodidact, because you almost have no network and art schools are the places to meet people, connoisseurs, artists and gallery managers. When you are an outsider, it can be really challenging, especially in Paris where the first question you are asked is: “what art school did you go to?” The Parisian art milieu is a closed world, but I guess it’s changing through social media. More and more young artists like me get attention from gallerists through these platforms.

Do you think the difficulty to get exhibited for autodidact artists is inherent to France?

I don’t really know how it works abroad, but from what I have heard, it seems easier to get recognition in other countries. Some friends of mine have often told me: “if only you went to London… or your art would really work in Berlin… in New York it would be bankable…” People always say that the grass is greener on the other side of the fence, but until you see it yourself it’s difficult to believe. And to be honest, without a solid network it can be difficult to export your art abroad. But I’m open to travel and to see how the art milieu works outside France.

Would it be that difficult to find a place for your art in Africa? Are there more opportunities there?

I think there are indeed many opportunities. For instance, I got the chance to see my work exhibited at Dak’Art in 2018. But beyond that, I have noticed that there are more and more art exhibitions and festivals across Africa, especially in Morocco, Senegal and Ghana. I also know there are two major arts centres in Douala, in Cameroon, but currently the bankable artists are the Ghanaians who are really appreciated by the British and the Americans for their photographic style. They create their paintings from pictures and put as many details as possible to show it is a real photograph. It’s very figurative and somehow unsettling, but I think I’m slowly moving toward this style, although it’s quite ambitious.

To make yourself noticed by Parisian art milieu you implemented a clever stratagem which consisted in posing in front of famous French museums with your creations with a placard saying ‘Exhibit me’. How did you come up with that?

Actually, I was returning to Paris after Dakar’s Biennale after a long stay in Oslo and after having lost my flat as well as my landmarks, so I needed to rebuild my Parisian life and to find a place to paint. Some friends for whom I work as a brand ambassador offered me a space and for six months I indulged in my passion. In the end, I gave my friends one of my paintings as a present to thank them, but instead one of them suggested to go outside and take a picture at Place de la République – which was not far – as I was wearing some pieces of clothing from their new collection. So, I sat on a stool with my painting by my side and the huge statue of Marianne behind me. Then, we posted the picture on social media and I immediately started to receive loads of positive comments. I think it was the first time one of my painting’s posts was getting such support. It made me realise that presenting my work that way was perhaps the way to introduce my work to people and that’s how the idea came alive.

Sometime later, I got the chance to meet someone who was doing an internship in a huge sports facility comprising a bright attic room and a coworking coffee area on the ground floor. The owners would sometimes organise exhibitions, and after seeing my paintings, the intern got her boss interested in my work. One thing led to another and I invited the owners to see me paint and we ended up agreeing on a date for an exhibition. So, my friends and I decided to take our idea and turn it into a promotional film. That’s how I began to sit on my stool in front of famous Parisian museums with the placard “exhibit me.”

Has this exhibition opened doors for you?

Yes, indeed. It helped me to get more visibility and to get the interest of contemporary art galleries. I got the chance to be seen by André Magnin, who is a pioneer in promoting African talents in Europe. I follow his gallery on social media, so it was an honour for me to see that someone like him appreciates my work.

When you’re facing a white canvas, what triggers in you the desire to paint?

It really depends. There are paintings for which I already have the exact sketch in mind, but sometimes I need to put everything on paper before throwing myself into painting.

What do you aim to achieve with your work?

Everyone has been a child once, and sometimes we tend to forget it. But I believe it is part of our personal journey to keep our inner child alive as we move to adulthood, and this is what I wish to communicate through my paintings. I want to bring people back to this moment of childhood, to when we used to look at everything with amazement and fascination.

You have been described as the “Franco-Cameroonian Jean-Michel Basquiat”. Who are the artists who left a mark on you as a young artist?

I must confess that this comparison was more relevant when I debuted, because at the time I used to paint faces with many juxtaposed black lines filled with colours. The result looked like some kind of scribble, which I understand could recall Basquiat’s work. Today, I gave up on using these three or four lines to draw a face. Instead, I have one line that I follow to create beautiful curves. I was really flattered to be compared to an artist like Jean-Michel Basquiat, but I think that my current style is quite distant from what he used to produce. I’m now more influenced by the work of artists like Hockney, Matisse or Picasso. I particularly admire David Hockney’s style, his work on colour really left a mark on me.

What is your favourite painting era?

I love the period we’re living in, we are having fun! We are free to experiment outside specific paths and rigid academic constraints.

It is said that spirituality shapes your work. How does it manifest in your pieces?

I don’t use the spiritual etiquette as a statement and I don’t place obvious labels on my paintings. Personally, I consider spirituality as the belief in certain values like love and forgiveness. It’s an intimate communion with your god(s) and a personal journey. In my work, I try to convey positive vibes and the values I have inherited from my grandmother who was a regular churchgoer. There is no mysticism in my paintings. However, I must admit that sometimes when I paint, even though I know what I want to say and achieve, it’s not powerful enough. But then there are times when I just paint without really knowing where I’m going, and it’s powerful, I feel as if a supernatural strength is guiding my hand. These are the moments when I feel connected to my spiritual being, and when I’m finally done, I know within myself it was worthy.

Except dancing and painting, do you have any other artistic passions?

Sure! There are a lot of people that enjoy my works but don’t have the means to buy them, so I offer to tattoo my drawings instead. I’m currently working on a new project and I hope I’ll be soon able to present it.