59the Venice Biennale 2022 | Open Letter: “Not Our Namibian Pavilion”

Like the Kenyan Pavillion in 2013 and 2015, Namibia is the latest victim of a ‘hijacked’ pavilion at the Venice Biennale, where people unfamiliar to the art circles of the respective countries claim representational obligations. An open letter and petition by artists and organizations from Namibia is challenging this problematic practise. 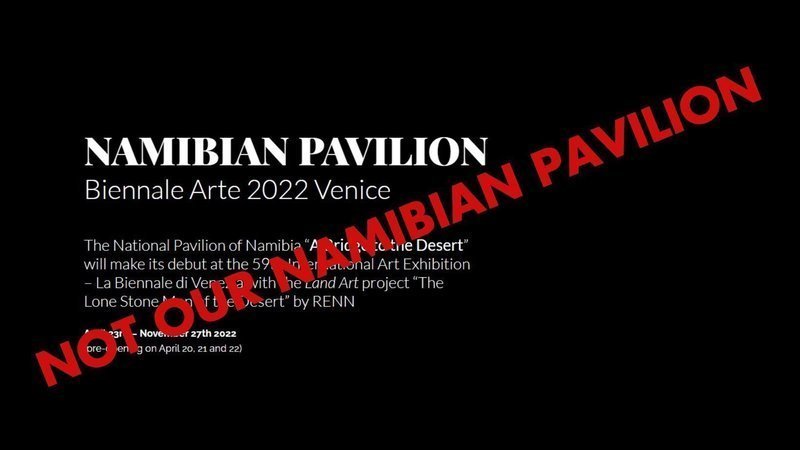 To Whom It May Concern,

This letter serves to explain our concerns regarding the representation of contemporary Namibian visual art at the upcoming 59th Venice Biennale 2022.

The 59th Venice Biennale opens on 23 April and runs until 27 November 2022. This is one of the largest events on the international visual arts calendar and receives millions of visitors every year. It has a long history of showing contemporary art from all over the world in the form of both National Pavilions and Collateral events and exhibitions. The Biennale is not a commercial art fair or a tourist expo, but an event that carries perceptions of symbolic and cultural prestige, with more than a hundred years of history: ‘It carries with it a profound global significance. (…) It enriches our discourses and articulates our sophistication as a people – and country – both to ourselves and to the world at large. It also goes a long way to inject much needed commerce and cultural capital into our societies’.

Namibia, like many other smaller countries, has not had national representation at the Biennale. This is often due to a lack of funding to cover the large expenses associated with hosting a National Pavilion at the Biennale. It is a goal for many of us to see Namibian artists represented at this major event. However, while recent articles in various media outlets have announced, ‘Namibian Pavilion Debuts at 59th Venice Biennale’, it is understood by many in the contemporary Namibian arts community to be poorly conceptualised and inappropriate debut that takes an antiquated and problematic view of Namibia and Namibian art.

There have been some recent highly controversial pavilions in Venice, which should offer Namibia a cautionary tale. For example, an international petition related to the Kenya Pavilion controversy in 2013 and 2015 describes how ‘a group of well-connected persons, who have neither the intellectual nor creative capacity to represent Kenya’s contemporary art to the international arena, are posturing to the world as the Kenyan Pavilion at the 56th Venice Biennial in Italy’. The show was dubbed by one critic as a form of “neocolonialism as multiculturalism”.

What follows is a summary of events leading up to the announcement of this debut, which has been organised by Marco Furio Ferrario. It is understood that Ferrario is associated with a lodge in the Purros Conservancy in the Kaokoland in Northern Namibia. This is the site of many so-called ‘Lone Men’, small metal and stone sculptures whose maker has chosen to remain anonymous. These ‘Lone Men’ are the subject of what is to be the Namibian Pavilion at this year’s edition of the Venice Biennale.

Serious concerns were raised after individuals and organisations in Namibia were made aware of the planned representation of Namibia at the Venice Biennale as a National Participant. What was noted is the following:

1. Problematic conceptual themes for exhibition
This body of work, as well as the proposed exhibition around it, takes as its conceptual core the idea of a relationship between humankind and nature. In this context specifically it is highly problematic as it engages in the historically racist premise that indigenous peoples are perceived to be closer to nature than to humankind in this dichotomy. This has been used to justify oppression of indigenous peoples by labelling them as naive and subhuman. Ferrario’s curatorial concept from his proposal for the Namibian Pavilion notes, “The setting chosen is such that only two types of observers can meet the artworks: the Himba tribes (who are one of the few tribes still living in a pre-technological state), and the few lucky and courageous travellers who venture out to explore the desert (who mostly belong to social groups opposed to the Himba, with highly technological and urbanized lifestyles)”. From this it is clear that the sentiment with which Ferrario approaches this exhibition lies in the prejudiced and colonial dichotomy of the ‘uncivilised’ versus the ‘civilised’.

This dichotomy is set out in the conceptual note even more through the conscious discussion of the “courageous travellers,” evoking another perception of the desert and its inhabitants as things to be explored by those with the abilities to do so through their “highly technological” lifestyles. As discussed by many historians and academics, this is the same ideological basis that underpinned colonial expansion and occupation of territories like Namibia, and the exploitation of its people and natural resources.

2. Inappropriate artistic contribution
The Namibian Pavilion as proposed by Ferrario will consist solely of the ‘Lone Men’ sculptures. While officially remaining anonymous and going by the pseudonym RENN, the artist is known publicly as a member of the tourism industry. He is largely disconnected from the contemporary art and cultural scene in Namibia. No acclaimed critical writing on his work could be found, and he has not exhibited at the level of a solo exhibition, or even in any group exhibitions, at the National Art Gallery of Namibia, or to our knowledge is present in any international collections. This is often the basic criteria for the calibre of artists that are taken to the Venice Biennale; i.e they have achieved both local and international recognition on legitimate cultural and critical platforms.

3. Lack of professionalism, curatorial experience, and knowledge in the field of contemporary art from Namibia:
As it appears to us, a group of individuals from Italy with no curatorial experience on a relevant level to date – let alone any meaningful engagement with art from Namibia – have undertaken the described concept to ‘represent’ Namibia in Venice. Almost no information is available regarding the experience or credentials of these individuals, or any connections to the art world here that could perhaps justify their initiative as representatives of Namibia at an event of this prestige and scale.

Based on several comments and suggestions made in the past weeks during communications with members of the Namibian arts community and this team, it also appears that they are not aware of the sensitivities involved with de-colonial and intersectional themes, especially in a particularly charged post-apartheid era where efforts to amend injustices of the past are key when engaging with a project of this nature.

This is all particularly disappointing considering that there are numerous established individuals and organisations that are totally invested in the promotion of Namibian visual arts, who have solid academic and technical expertise in this area, who would be far better positioned to do justice to this important debut. The argument that these skills need to be outsourced from foreigners is simply untrue and undercuts the skills already in the country.

Many other countries have a procedure of inviting calls for proposals for exhibitions at the Venice Biennale, which is a process that might have included more diverse, and importantly, Namibian voices in this initiative. The National Art Gallery of Namibia is, for example, an organisation that should surely have been involved in this project.

It would be problematic to dub the pavilion as a ‘Namibian pavilion’ without any real research, understanding, curatorial knowledge or even participation from Namibian artists beyond being added last minute for a fringe exhibition that is not officially part of the Pavilion. We still have not had any confirmation that they were successful in finding a secondary artist, or in what capacity that artist would be exhibited.

Conclusions National Pavilions at the Venice Biennale need to be endorsed by the government of the country in order to be able to carry the country’s name. This endorsement was obtained by Ferrario and his team from the National Arts Council of Namibia, and Ferrario was officially appointed the Namibian National Pavilion curator by Namibian Minister of Arts and Culture, Ester Anna Nghipondoka.

This endorsement was a decision that was made with the idea that it would put Namibia on an international stage for the benefit of tourism to the country. Unfortunately, we believe that this decision has been made through a very narrow lens, which promises to not benefit the visual arts community of Namibia, but rather the select few involved in this very isolated initiative.

The Angolan pavilion curated by the Angolan architect Paula Nascimento and Stefano Rabolli Pansera won the Golden Lion Award for best national pavilion across all countries represented. The curatorial concept was developed with great care over several years and placed an older generation of artists from the country in careful dialogue with a younger generation. It was also Angola’s first time at the Venice Biennale.

However, our fear is that this current proposal will not be likened to this remarkable achievement, but rather to the scandals associated with Kenya. In 2015, Kenya’s minister of culture publicly condemned the pavilion and its organisers. Kenya officially cancelled its pavilion days before the opening due to public pressure and clear indications that the proposal was not representative.

Based on the summation of issues outlined here it is our hope that the Namibian government’s endorsement of this initiative can be withdrawn. This would mean that Ferrario and his team would no longer be able to participate in the Venice Biennale as the ‘Namibian National Pavilion’ and if they still choose to do so, could participate as an independent/collateral exhibition .