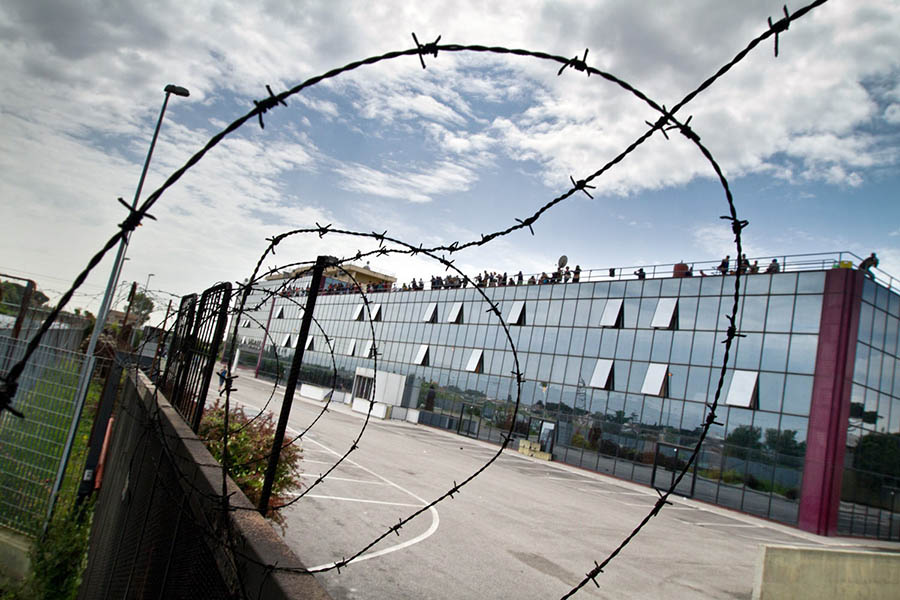 Rome, Tor Sapienza. There is a 4 star hotel with a quote by Dostojevskij on it: “Everyone is responsible to all men for all men and for everything.”

That hotel no longer stands, only its skeleton remains: It shut down suddenly in 2011 due to bankruptcy and one year later became occupied by 200 families from 30 different nationalities who desperately needed a roof over their heads. This is how The 4 Star transformed into a condo, a unique experiment of self-organization and multiethnic, multilingual and multicultural cohabitation of 500 people.

Italian photographer Valerio Muscella and Paolo Palermo gave a voice to the emergency, the dignity, the rights and the dreams of those who live in the structure with their web documentary, 4 Stelle Hotel.

One night at a bar around Pigneto (a popular district of Rome) we met Valerio to talk about his project.

How was the idea behind 4 Stelle Hotel born?
We knew something was going on in that building. We were curious. I was born and bred in Rome and I needed to have a better understanding of what. This is how Paolo Palermo and I went knocking at their door. Obviously, we did not just start shooting and filming, it took some time.

How long did it take you to approach the residents, to gain their trust and eventually, to shoot?
We went in on the second day of the occupation and we left two years later. Since then, we never stopped. At a point, we became a part of the protest.

We knew all those stories, we really went into it. The edge was transient. We went in there with those intentions but did not really show it from the beginning. We were interested in gradually approaching, blending in, understanding their stories from within.

We all knew something new was happening in town and we wanted to be a part of it. Those projects you put yourself in make you bond with the place and establish a relationship with people. After this bonding was created, shooting and filming became a necessity.

With time, what we wanted to document became even more clear: that’s when we understood it would have become and interactive web documentary. How did you choose this format?
We asked ourselves how we could, combining our languages, express such a variety. We decided to blend into the community to better reflect their and our identity. 4 Stelle Hotel employs photography, video and web: it was made together with Paolo Palermo, Fabio Ragazzo and Martino Bresin.

Were the migrants welcoming and available to get in touch with you?
In all contexts there are those who want to share stories and those who don’t, some approached us right away, some others never did.

So, the project was made with the occupants, a real collaboration. How was their reaction when they saw themselves on the screen?
Yes, absolutely, it all only exists thanks to the relationship we have established all together. We had some intermediary screenings. During the final one there were forty children in the first row, all from different nationalities; whereas right behind there were the grown-ups, commenting about families, friendships and the scenes… It was moving.

The movies tell the stories of the individuals and of the single communities, along with the everyday life of the entire community. A window into what could be a multicultural future.
Yes, indeed. The idea is to explore “the possible”. One of the objectives, from the beginning, has been to give an alternative perspective on life among different ethnicities. They are people who explore new possibilities of cohabitation.

Have you ever seen any conflict?
Yes, but it was never about etnhicity or race. Just simple fights within the condominium.

Another important theme on which 4 Stelle Hotel brings the attention is the “House Plan”, encouraging to sign the petition launched by the “Movements for the house”.
Yes, the House Plan is having devastating effects and not only for problems related to residency, the possibility of sending children to school and providing healthcare. Not only is it a problem in the present, but it is also a mortgage on the future; we wanted to send a clear message on the intentions of institutions towards those who want to break away from State-controlled emargination clusters, and instead move towards a more sustainable self-organized system.

How is it to live in constant fear?
Every family hopes to have their own house one day, it’s understandable to hope for having a house of your own and to not have to sleep on the streets.

The city of Rome has been inflicted several hits regarding independent spaces, many occupations have been cleared out and the projects carried on between those walls have been cancelled.
Yes, it is common to search for places and a way to express oneself in countries in recession or where life is difficult. In Rome, three ways have been taken: LAND (urban gardens, reconversion of facilities and land), CULTURE (reconversion of spaces devoted to creativity, generating movements that are to bound as they involve people who do have a roof on their heads but still want to experience the vitality and the possibilities given by the project), HOME (a fundamental need). My idea is that we have to keep on working and organizing.

I looked into your projects, there is also one about Lampedusa. I was expecting to see the Lampedusa of the landings, the hospitality centers and the catastrophes ashore, but all this is just in the background: your eye chooses to share another look, that of a disabled resident of the island.
When you want to tell only a slice of the truth, you can always choose how to direct it. It’s hard for me to talk about a place without its people. In the case of Lampedusa, I had this feeling I have had ever since I was a child, I have always been attracted by details wherever I go, now I am used to it, and I foster it.

In the case of Salvatore, I could go in a place everyone speaks of and experience something completely different from what we read almost every day in newspapers. I wanted to live it personally without being influenced. I followed my attitudes and the course of events. The more I try to talk about the experience that I feel and less about what I think, the more the images I produce make sense: if you try to describe what you live, images will be real. In Lampedusa, I have seen an island far away from the world: sometimes it is under the spotlights with the migrants (whom I haven’t ever seen), but you can really feel how abandoned it is, there are many soldiers, much loneliness.

What did make you want to shoot the reportage?
I wanted to talk about what happened during my travels. I basically started as a kid, this is why there is not a real starting date. The first reportage I made that had a wide diffusion was a project about kids in the streets of Bolivia. I would love to continue blending together passion and academic style. I studied clinical psychology of communities and I specialized in trans-cultural psychology, I would love to continue blending together these two sides of my myself, photography and social effort.

What is in your future?
We are in a pretty advanced phase of the 4 Stelle Hotel documentary.

Amazing. Can I write abou it, or is it a secret?
Of course you can write about it, actually, let’s cross our fingers!

All images courtesy of Valerio Muscella